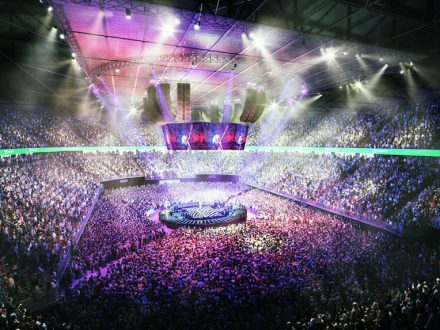 US-based architect HOK has unveiled its plans for the upgrade of the AO Manchester Arena, to the tune of £50m.

ASM and HOK’s scheme will also add new entrances, and more dressing rooms in addition to production areas within the arena.

Work on the site, which has a current capacity of 21,000 people, is expected to begin in the summer.

HOK director of sports and entertainment John Rhodes said: “[The expansion will] incorporate the latest and most impressive spectator offerings, from hospitality lounges to reimagined concourses and elevated premium offerings, while simultaneously upgrading back-of-house spaces to ensure the arena continues to attract the most impressive artists long into the future.”

AO Arena general manager Jen Mitchell said: “This [expansion] will not only elevate the experience for guests and fans, but for everyone who sets foot in the venue, including artists, production, crew and our staff, who work so hard to make the magic happen at each and every event.”

Multiple music acts – including Billie Eilish, George Ezra, Alicia Keys and Swedish House Mafia – are already booked to play at the arena this year, but the renovation work is being planned around these gigs.

The site’s expansion comes as Bam Construct moves forward on a £250m job to develop the Co-op Live arena, also in Manchester.

In May 2021, it awarded contracts totalling £150m to subcontractors on the site, including an M&E contract to Wates-owned SES Engineering Services.