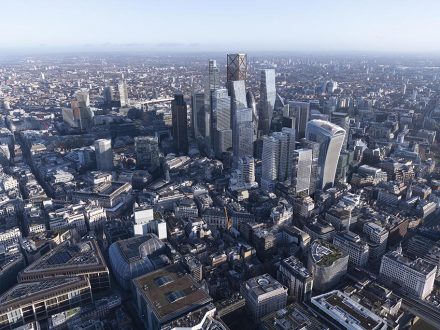 A record number of tall buildings were given planning consent in London last year, research by New London Architecture and Knight Frank has revealed.

The annual London Tall Buildings Survey found that the number of planning applications rose by 26 per cent in 2021 compared with 2020.

Meanwhile, the number of tall buildings given planning permission increased by a quarter, with 341 that have been granted planning consent awaiting construction. According to the report, a further 71 schemes have planning consent and await the completion of Section 106 agreements.

More than 80,000 new homes are included within the schemes, which represents just under two years’ worth of the current requirement for new homes across Greater London, the annual total for which stands at 52,000 homes per year.

The survey does, however, point to a slowdown in the rate of tall-building construction in London, with the pipeline of towers over 20 storeys high falling by 1 per cent, from 587 to 583. Developers also submitted fewer planning applications in 2021, with the total falling by 13.3 per cent compared with the level in 2020. A total of 72 planning applications were received, which is 37 per cent lower than the market peak in 2018.

Of the applications submitted in 2021, a total of 12 (17 per cent) were granted full planning permission the same year and a further five were approved at planning committee, but had yet to sign S106 agreements by 31 December.

Peter Murray, curator in chief of New London Architecture, said: “Signs of a slowdown in this year’s results is not entirely unexpected; a combination of the uncertainties created by the pandemic, rising build costs, new safety measures, environmental regulations and increased affordable-housing obligations in recent years have imposed greater scrutiny on high-rise development, and it has had a knock-on effect.”

The survey also revealed that the average height of tall buildings applied for in 2021 was 28 storeys. However, the height of schemes varied by borough, ranging from an average of 31 storeys for applications across inner London boroughs, to an average of 25 storeys in outer London.

Stuart Baillie, head of planning at Knight Frank, said: “The future pipeline may have contracted slightly, but it remains significant. In total, there are 583 tall buildings which are proposed or approved, with 109 of those currently under construction – 28 per cent and 19 per cent higher than back in 2016 respectively.”