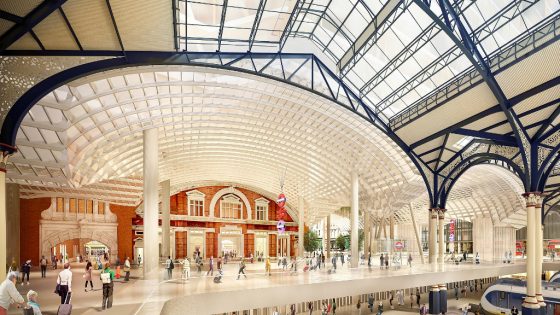 Sellar has unveiled its initial proposals for the £1.5bn redevelopment of Liverpool Street station in London.

The developer, responsible for other major projects in the capital such as the Shard, outlined plans for a new sustainably developed office, retail, and leisure scheme with new public and green spaces.

Proposals for the station, first opened in 1875, also include the modernisation of its existing infrastructure to transform it into a “world-class transport hub”.

Sellar has partnered with Mass Transit Railway (MTR) Corporation, which is a majority state-owned public transport body and developer based in Hong Kong.

But the plans have been met by strong objection, with Heritage England calling them “fundamentally misconceived”.

According to data intelligence provider Glenigan, Mace and Gardiner + Theobald have been appointed as consultants on the scheme.

A main contractor has yet to be appointed to the mega-project, while Construction News understands the tender process has not begun. Mace refused to rule out bidding for the works.

The proposals lay out £450m of infrastructure works, which include increasing the number of lifts at the station from one to seven. Six escalators will be built, while the concourse and entrance to the London underground from the station will be redeveloped.

An energy-efficient upgrade has also been put forward by the developer. This would see ten floors of workspace, designed with a focus on well-being with flexible office floorplates.

An all-electric building will use the heat emitted from the offices to heat the hotel and the publicly accessible pool. Solar panelling and rainwater harvesting are some other features planned along with 1.5 acres of public realm.

A careful restoration of the Grade II-listed Andaz hotel will be carried out by retaining its historic façade – and Liverpool Street will be pedestrianised.

New retail and leisure spaces are also proposed within the large-scale transformation of the station and its vicinity.

Commenting on the plans, Sellar chief executive James Sellar said: “Poor commutes are a barrier to London’s growth and it is extremely rare to have the opportunity to positively improve millions of passenger journeys every year.”

He added that the public-private partnership with Network Rail would benefit the city, without a pinch to the taxpayer.

“Our vision to significantly upgrade Liverpool Street station will alleviate its chronic overcapacity issues and future-proof it for generations at zero cost to the tax or fare payer”, he said.

Historic England chief executive Duncan Wilson, however, said that the scheme would bring few benefits to the station at a heavy cost to the heritage buildings involved.

“We believe that this scheme is fundamentally misconceived and misses the opportunity to unlock real public benefits while also enhancing the station’s heritage,” he said.

“We will work collaboratively with Network Rail and developer Sellar in the hope that together we can achieve a better design outcome,” he added.

A public consultation will be carried out from 21-23 November 2022 and a planning application is expected to be filed in early 2023.