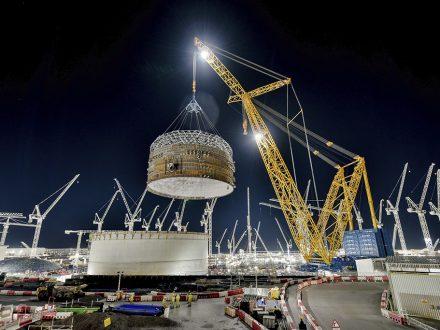 Laing O’Rourke and Bouygues Travaux Publics have been told to improve their health and safety procedures at Hinkley Point C after a worker fell from height.

The scaffold worker avoided serious injury, despite falling from a height of about 5m from scaffolding on 4 March.

The Office for Nuclear Regulation (ONR) has served Improvement Notices to the two contractors, which are joint-venture partners in Bylor JV, which is working on the Somerset site under construction.

The ONR’s investigation established that there was a failure by Bylor to ensure the work was properly planned, appropriately supervised and carried out in a manner that was safe, so far as reasonably practicable. This is in contravention of Regulation 4(1) of the Work at Height Regulations 2005.

ONR inspector John McKenniff said: “Thankfully, on this occasion, the worker did not sustain any serious injuries, but it could have been much more serious.

“We have issued this Improvement Notice to ensure that both organisations take action to prevent any similar occurrences in the future. We will monitor the actions of Bylor JV and will have no hesitation in taking action if further shortfalls are identified.”

A spokesperson for Hinkley Point C said: “We accept the findings of the regulator and have ensured that the shortfalls identified are addressed in order to avoid a repeat of such an incident. The safety of people working on our site is of paramount importance and we will continue to take action, alongside our contractor and trades union partners, in order to reinforce and improve our already strong safety culture and record.”

According to HSE’s 2020-21 report on construction site injuries, half of all fatal injuries were caused by falling from height.

Hinkley Point C project bosses recently revealed that 3,000 more workers than first estimated will be needed at the peak of construction, which is putting pressure on accommodation facilities.