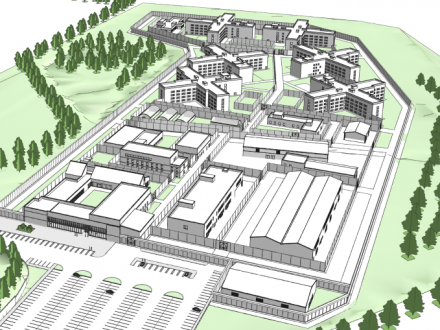 Kier has been confirmed as the builder of a new £400m prison in East Yorkshire.

The contractor snapped up the job from the Ministry of Justice (MoJ) and will start work on the 1,400-space facility in the village of Full Sutton this autumn.

Construction News revealed last year that Kier, Wates, ISG and Laing O’Rourke had been chosen to deliver four prisons under an alliance deal, for a combined total of £1bn.

The £400m project to build the East Yorkshire facility is the first of the four to have a specific contractor assigned to it.

The three other prisons will be in Buckinghamshire, Warwickshire and at a location in the South East of England.

The new East Yorkshire prison, which will be opposite the existing HMP Full Sutton, is set to open in 2025. It will be the first new zero-carbon prison to be built in the UK. It has been designed with solar panels, heat pumps and an efficient lighting system to enable lower energy usage.

Hundreds of construction jobs will be created, at least 50 of which will be earmarked for ex-offenders.

Kier Construction group managing director Liam Cummins said: “We’re proud to give people the opportunity to work with us to deliver a best-in-class facility, built on modern methods of construction and engineering excellence.”

Prisons minister Stuart Andrew said: “I am delighted work can begin on yet another modern, innovative prison that will skill-up untold numbers of offenders to live a crime-free life while making our streets safer.

“The new prison at Full Sutton will also support hundreds of jobs, in construction and afterwards, representing a major boost to Yorkshire’s economy.”

The exact locations of the three other prisons included in the plan are still being finalised, but the MoJ pledged last year that all four would be completed by early 2026.

Two other substantial prison jobs are currently on the road to completion. Kier is leading the £253m project to build HMP Five Wells in Wellingborough, which is set to open in 2023.

Meanwhile, Lendlease is currently constructing HMP Fosse Way in Glen Parva, Leicestershire, for £286.6m. It is expected to open in 2023.