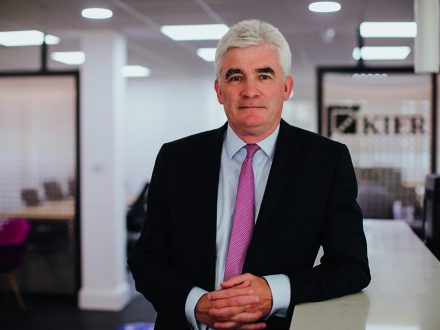 Kier expects its order book to jump by more than a quarter, it has revealed in a trading update.

The UK’s second-largest contractor said it will record a “strong operational performance” for the year just ended, with its order book expected to stand at £9.7bn – 26 per cent higher than in the previous year.

“Inflationary pressure” and “political and economic uncertainties” failed to dampen Kier’s performance in the year to 30 June, the statement added.

When the contractor announced its half-year results in March, it warned that inflation had hit its operating profit to the tune of £3.4m.

Inflation had caused delays to procurement and to projects starting at the contractor, it added at the time.

Today’s trading update said its performance will be in line with expectations.

“Kier has won new, high-quality and profitable work in its markets, reflecting the bidding discipline and risk management embedded in the business,” it said. The firm will publish its full-year results in September.

Debt at the contractor has meanwhile fallen to £220m from £432m, partly thanks to the sale of Kier Living to private equity firm Terra Firma in April 2021. Cash generation and a £241m equity cash raise announced last year helped to drive the figure down.

“This, coupled with the strong order book and strengthened balance sheet, gives the board confidence in our medium-term value-creation plan and the continued success of the group,” he added.

Last month, the contractor bagged a £420m highways job in Northamptonshire, which will last for the next seven years at least.

Kier also flagged a £500m job to upgrade six prisons, which was split between itself and Wates.

Earlier today, a Kier/Bam JV was named as a winner on the major upgrade to Plymouth’s Devonport 10 naval dock.