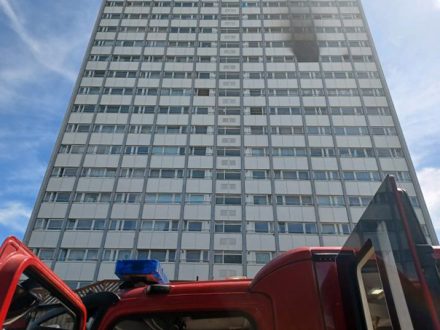 Cladding on a block of flats that caught fire close to Grenfell Tower in West London was identified as unsafe by Kier earlier this year and was due to be removed, Construction News can reveal.

Eight fire engines and about 60 firefighters were called out to a fire at a high-rise block on Queensdale Crescent, Shepherd’s Bush, at 9.23am yesterday, after a flat on the 12th floor caught alight.

The fire, which occurred at Stebbing House – part of Hammersmith and Fulham Council’s Edward Woods Estate – was brought under control by the London Fire Brigade by 11am. The London Ambulance Service confirmed that one person had been taken to hospital following the blaze.

Construction News understands that the fire, which forced a number of residents to evacuate the building, occurred on the west face. However, it is possible that an even worse incident was narrowly averted.

A recent fire-risk assessment carried out by Kier recommended that photovoltaic (PV) panels on the building’s south side – metres away from the location of the blaze – should be removed for “fire-safety reasons”.

As recently as the beginning of April, the council approved an application for the removal of the solar panels, which were added to the south face of the building during a refurbishment carried out a decade ago.

A report by planning consultants revealed that Kier judged that the solar PV panels, which still have not been removed, did “not comply with the requirements of the building regulations-approved document B and in line with BR135 guidelines”.

The planning consultant, Lichfields, said panelling on the south elevations of the building should be removed for “fire-safety reasons” and to “ensure resident safety”.

Following yesterday’s fire, a spokesperson for Hammersmith and Fulham Council told CN that it had carried out a lot of work to improve fire safety at the building in recent years, including upgrading its wet risers, installing new fire-safety doors and improving smoke-detection systems.

The incident comes almost five years to the day that 72 people tragically lost their lives in the Grenfell fire.