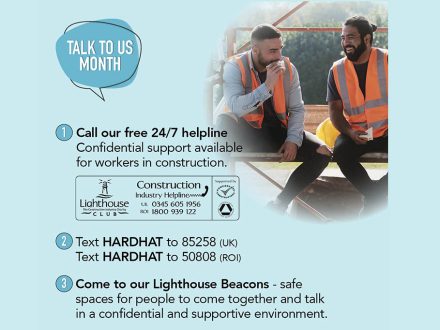 Construction industry charity the Lighthouse Club is encouraging workers to talk to colleagues about their problems as part of a month-long campaign to tackle mental health issues.

The charity’s ‘Talk to Us’ initiative, which will run throughout July, asks construction workers to open up and share their struggles with friends, family and colleagues as a way of preventing more serious issues.

“Talking can make us feel vulnerable, but it shouldn’t be seen as a sign of weakness,” said Lighthouse Club chief executive Bill Hill.

“We know that all the work we are doing, together with [the] efforts of the industry, is helping to reduce the stigma of talking about feelings and problems,” he added.

Construction workers often work on contracts that take them away from home, said the charity, which can make them feel disconnected from their usual support system of family and friends.

It also said that in a male-dominated industry (87 per cent male), employees can be less likely to talk about their mental health because of the stigma surrounding masculinity and asking for help.

Although Hill said a spike in the number of calls received by its helpline indicated a positive shift in the industry, the campaign was looking to improve on these developments.

The charity’s current campaign, ‘Help Inside the Hard Hat’ aims to raise awareness of all the support available to companies and individuals, and it highlights the importance of reaching out.

Construction News’ recent Mind Matters survey found that 53 per cent of the 1,230 respondents said they felt comfortable talking about their mental health with colleagues, which was a 38 per cent increase on the previous survey in 2019.

This week, a construction worker from Hinkley Point C reiterated the importance of opening up and talking, after a Daily Mail article made light of the progress that workers were making in sharing their feelings.

You can find out more about the ‘Talk to Us’ campaign here.