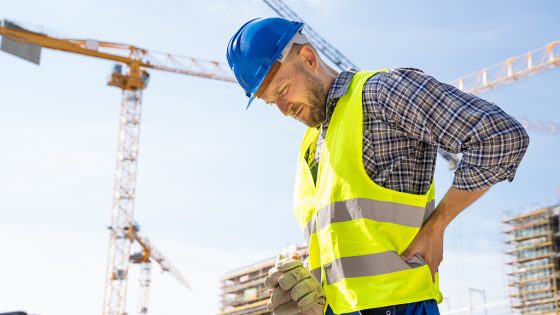 The Health and Safety Executive (HSE) will carry out 1,000 inspections over the next two months in a bid to tackle aches and pains caused by unsafe lifting operations.

Throughout October and November, the watchdog confirmed it would carry out site checks to investigate how workers move heavy and bulky materials.

It cited data from its 2020/21 labour-force survey, which found that about 40,000 workers in the construction industry were suffering from long-term injuries to muscles, bones, joints and nerves, known as musculoskeletal disorders (MSDs).

Addressing employers, the inspectorate stressed it was their legal requirement to prevent the ill health of their workers, including aches and pains resulting from their work.

Employers were also advised to talk to their employees about controlling risks to injury on site, including preventative training and equipment.

With proper management, it said, lifting work was less likely to leave workers in pain.

HSE principal ergonomist Matt Birtles said MSDs alter a worker’s life in many ways beyond the workplace: “They can struggle to get themselves dressed and undressed; they can be unable to pick up their children or grandchildren.

“They can struggle to sit down and stand up, they can struggle to keep still and move around. The most intimate parts of their lives can be severely affected – they might be desperate to go to the toilet, but find themselves unable.”

Birtles acknowledged that it is sometimes uncomfortable for workers to speak up about such pain, which is why it is critical to put measures in place to protect them.

HSE’s head of construction, Sarah Jardine, said its inspectors would be visiting a range of construction sites to see which checks businesses had put in place to protect workers.

She added: “Everyone involved in construction has a role to play in keeping people safe. Risks must be managed where they can’t be prevented, and risk-management arrangements must be reviewed frequently to ensure they are effective.”

In 2019, research by Loughborough University found that MSDs cost construction employers £646m per year. MSDs may also lead to painkiller addiction, which in turn affects the mental health of construction workers.