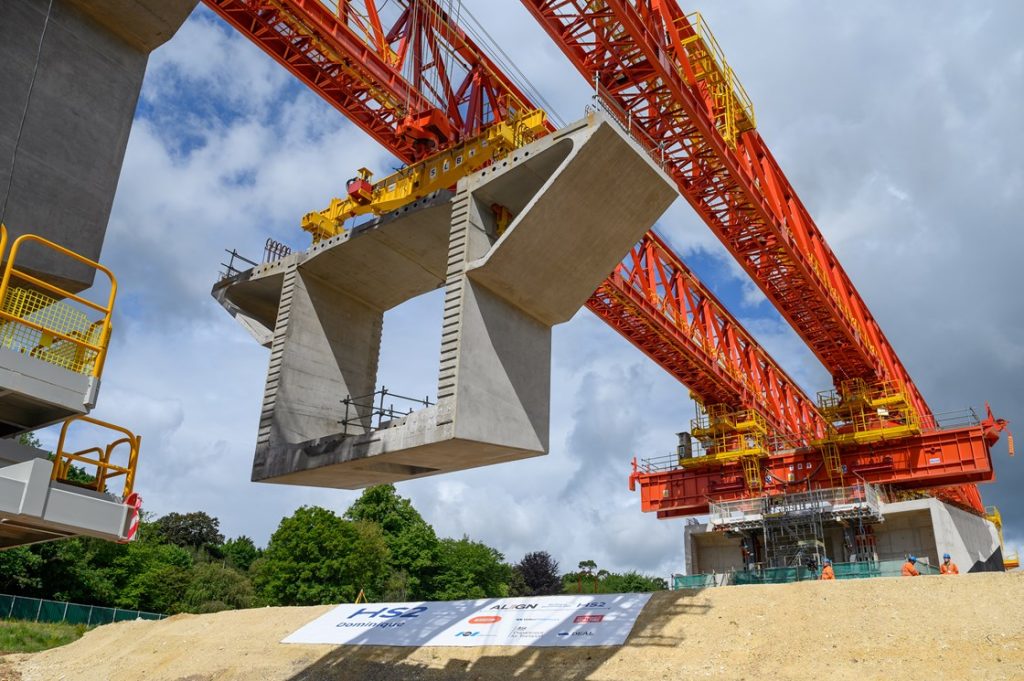 A major milestone in the delivery of the HS2 Ltd project was achieved as work began on the UK’s largest railway viaduct, using a 700-tonne bridge-building machine.

The bright orange “launching girder”, named Dominique, was thrust into action on 31 May, as it hoisted into position the first of 1,000 giant, concrete deck segments that will form the Colne Valley Viaduct.

Expected to take just over two years to complete, the railway bridge will span more than two miles (3.4km) across a series of lakes and waterways between Hillingdon and the M25.

The bridge, which will be the longest of its kind in the UK, is considered one of the showpiece features of the phase one route from London Euston to Birmingham.

“Once complete, this record-breaking structure will form a key part of the HS2 railway, helping to deliver better connections across the UK, free up rail capacity on the train network and offer passengers a zero-carbon travel option.

“I’d like to thank all those involved in getting us to this exciting stage and look forward to seeing the whole viaduct come together over the coming years.”

A total of 56 piers, each weighing about 370 tonnes, are being constructed along the valley. These allow the girder to transverse the landscape below, installing deck segments as it goes.

Segments are put in place on each side of the central pier, using a cantilever approach to balance the structure, as two half-arches either side of each pier are constructed simultaneously. Steel tensioning cables will be threaded through the segments to strengthen the bridge.

Each segment is a unique shape, coming together like a puzzle to form one continuous structure, with a modular approach chosen to “ensure quality, safety and efficiency”.

They are produced on site at the 100m-long pre-cast factory, which is visible from the M25. Up to 12 segments can be cast each week using a ‘match-casting’ technique.

HS2 minister Andrew Stephenson, who attended the launch, said: “Today, HS2 began construction on what is set to be Britain’s longest railway viaduct; a landmark moment for HS2 and a feat of British engineering, taking the HS2 line from London and into Hertfordshire and Buckinghamshire.

“Infrastructure is the backbone of HS2, and this viaduct will be integral to delivering faster journeys and an increased capacity rail network.”

The girder, built in 2004, was first used during the construction of the Hong Kong East Tsing Yi Viaduct and is named after Bouygues engineer Dominique Droniou, who played a leading role in its design.

The factory and surrounding buildings will be removed once construction is complete, and the whole area between the viaduct and the Chiltern tunnel will be transformed into an area of chalk grassland and woodland as part of HS2’s ‘green corridor’ project.

Align project director Daniel Altier said: “The start of the erection of the deck segments marks the latest important milestone for Align, relating to the construction of the Colne Valley Viaduct. There has been a lot of hard work involved to get us to this point, and the achievements so far are a great example of what collaboration and excellent teamwork can deliver.”

Thurston warned MPs earlier this month that soaring inflation could put pressure on HS2’s budget for phase one, with the project watching costs carefully.

Tunnellers digging HS2’s Chiltern tunnels were trapped for 13 hours after a fire broke out on 10 May, prompting an investigation by the contractor.