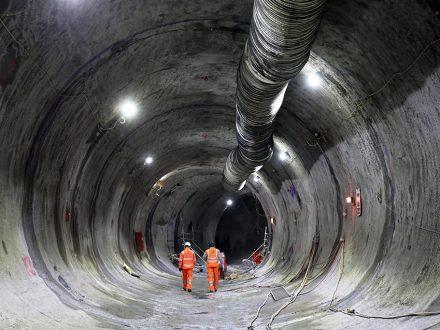 HS2 has unveiled a huge, 93-metre-long service tunnel, which has been built to house a new traction substation at Euston.

As well as the tunnel, a 20-metre-deep box has been excavated for the facility. Traction substations are used to convert electrical power into a form suitable for a railway system.

The new box, known as ‘the sugar cube’ due to the design of its exterior, will allow the relocation of equipment needed to provide ventilation for the Northern line.

The 6.5-metre-wide tunnel took 16 months to build. The Mace/Dragados joint venture (MDJV) sank a 20-metre-deep shaft before carving out the rest of the underground passage and coating the space with a primary, sprayed-concrete lining.

After applying waterproofing, the team reinforced the tunnel with steel and concrete, giving it the strength and structure needed ahead of the construction of the HS2 station above it.

MDJV was supported on the works by its principal sub-contractors, Cementation Skanska, Careys and JGL.

The design of the tunnel was changed to lower the amount of carbon used in construction and efforts were made to reuse material already on site, resulting in 1,000 fewer lorry trips.

HS2 Euston project client director Andy Swift said: “Our Euston team has been working hard behind the hoardings at Euston to create the space required for us to build HS2’s new Euston station, as well as a better connected London Underground station.

“The progress to date has been great, moving the existing underground infrastructure, with seamless collaboration between contractors and stakeholders, with a focus on minimising community disruption.”