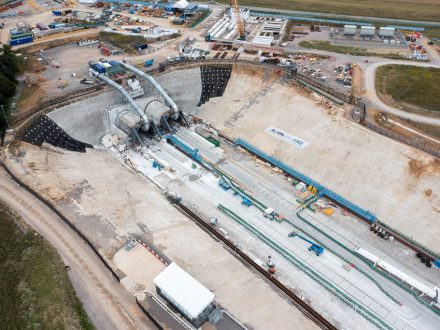 Tunnellers digging HS2’s Chiltern tunnels were trapped for 13 hours after a fire broke out on Tuesday night.

HS2 Ltd has launched an investigation into the fire near the Chiltern Tunnel South Portal site in Rickmansworth, just inside the M25.

The fire was on a vehicle that transports workers into the tunnel to work on the tunnel-boring machine (TBM). While transporting three workers who were on their way to a night shift in the TBM, Cecilia, the car caught fire. The workers removed themselves safely from the car and attempted to extinguish the fire, but the engine exploded about 1.6km from the TBM.

The three workers followed safety procedures and sheltered within Cecilia’s safety chamber. Once the fire was extinguished and the situation under control, they were removed safely from the tunnel. Reportedly, they were within the safety chamber for a full 15 hours, from 7pm on Tuesday night until 10am on Wednesday morning.

Emergency services attended the scene, but no injuries were reported. The TBM was untouched by the fire.

The South Portal site is being managed by Align, a joint venture of Bouygues Travaux Publics, Sir Robert McAlpine and VolkerFitzpatrick.

A spokesperson for HS2 said: “We can confirm that the emergency services attended an incident at the HS2 Chiltern Tunnel South Portal site Tuesday evening. An investigation into the incident is ongoing. All personnel are safe and accounted for.”

HS2 Ltd will give a further update once its investigation into the incident has been completed.

Designed specifically for the geology of the Chilterns, TBMs Cecilia and Florence (which is boring the northbound tunnel) are 2,000-tonne, 170-metre-long, self-contained underground factories, which dig the tunnel, line it with concrete wall segments and grout them into place as they move forward.

Last month, HS2 Ltd’s board minutes revealed that a different health and safety metric is being deployed on the project to that used by most of the industry. HS2 Ltd claims its method of measuring accidents better reflects the actual situation on site.

In August 2021, HS2 Ltd called in the bosses of all the tier-one contractors working on the project due to concerns about an increase in accidents, but the rail group maintained that this higher incidence did not correspond to the 200 per cent rise in the amount of work.

In October 2021, the Unite union claimed there had been a spate of serious injuries on sections of the HS2 line being delivered by the Skanska/Costain/Strabag joint venture.

Meanwhile, the Health and Safety Executive (HSE) announced in March that it would increase the number of inspections carried out in Birmingham in the coming months, as work is set to boom across projects, including HS2.