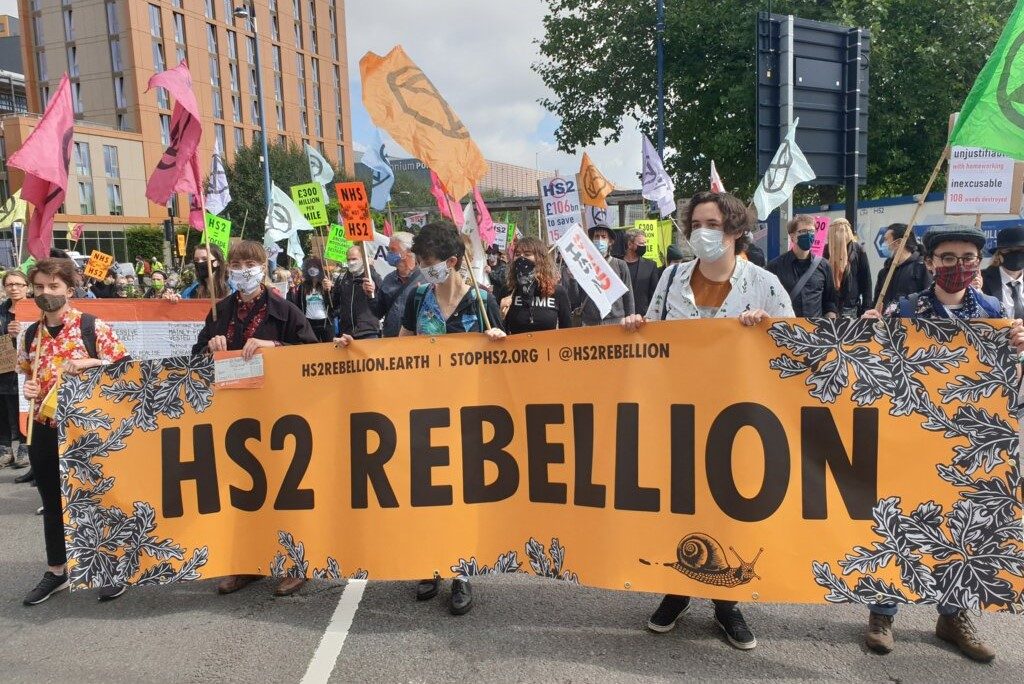 HS2 Ltd is seeking a route-wide injunction to prevent protesters interrupting the construction of the high-speed rail line.

The firm has dubbed protesters “violent activists”, but its opponents have labelled the move a “threat to democracy”.

The injunction, which is being sought in the High Court, would apply to a list of more than 50 named individuals as well as “persons unknown” who might mount protests in the future.

If granted, the injunction would effectively criminalise protests on HS2 construction sites. Anyone trespassing on a site covered by the injunction could potentially be arrested by police and prosecuted for contempt of court. In the absence of an injunction, trespass is usually a civil rather than criminal matter.

The hearing began yesterday (26 May) and is due to close today. It has been slammed by wildlife campaigners and anti-HS2 protesters as stymying the right to peaceful protest against the new rail link.

HS2 Ltd has stated that it hopes the injunction will deter what it calls “violent activists”, and reduce the incidence of trespass and obstruction on its worksites that endanger health and safety.

Giving evidence to parliament’s Public Accounts Committee earlier this month, HS2 chief executive Mark Thurston said the firm expected the cost of handling protests across the route to reach up to £200m by the time phase one and phase 2a are built.

In its court application, HS2 Ltd has requested a route-wide injunction to cover land on phase one and phase 2a, between London and Crewe, that is either owned by the secretary of state or to which HS2 Ltd is entitled to possession. The injunction seeks to prohibit trespass and obstruction of access.

A spokesperson for HS2 Ltd said: “The construction of HS2 is playing a vital role in Britain’s economic recovery from the pandemic, with almost 25,000 people already working on the project and tens of thousands of additional jobs supported through our supply chain.

“We urge everyone who cares about our natural environment to support a project that is providing work across the UK today, and in the future will get people out of cars, off planes and on to zero-carbon rail travel.”

However, one protest group, HS2 Rebellion, said the injunction could be used to ensure HS2 Ltd or its contractors can undertake actions that could harm the environment without being overseen by members of the public.

In March, four activists were acquitted of charges of aggravated trespass at High Wycombe Magistrate’s Court, after a judge ruled the group had been campaigning legitimately to prevent environmental damage at a site of national importance for biodiversity.

According to HS2 Rebellion, HS2 contractors felled a 200-year-old Alder tree, which was home to a number of rare species, and the body didn’t have a bat licence at the time the tree was felled.

A spokesperson for the group said: “HS2 are in the High Court seeking a route-wide injunction, which will effectively criminalise peaceful protest and remove any possibility of independent oversight of a project that has been beset by allegations of wildlife crimes, violent behaviour by staff and polluting London’s drinking water.

“Following the recent Policing Bill, this court case marks the next step in the Conservative government’s ongoing war against peaceful protest. It undermines democracy and is a serious attack on civil liberties.

“HS2 are attempting to injunct an area of land that stretches halfway up the country, from London to the north-west, and in places [that] will be wider than Wembley Stadium.

“This injunction will threaten anyone who, knowingly or unknowingly, steps foot on HS2 land, stops briefly in any of their gateways, walks along any road that crosses their land or voices discontent about the project with arrest, imprisonment, seizure of assets and extortionate fines.”

In 2020, a protestor was given a six-month suspended sentence for breaching an injunction covering a particular HS2 site. And, in 2019, CN reported on the use of ‘persons unknown’ injunctions to deter so-called urban explorers from entering live construction sites.