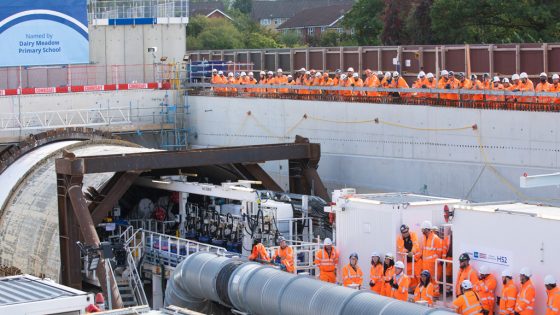 HS2 has fired up its first giant tunnel boring machine (TBM) in London.

The 2,000-tonne piece of equipment, known as Sushila, was launched in Hillingdon on 6 October and will bore five miles towards Greenford in west London.

Sushila will work on a 24-hour basis for the next 22 months, except on Christmas Day and bank holidays, and measures 140 metres in length.

It has a diameter of around 10 metres, and will be operated by 15 people working on a shift pattern. The TBM is one of six that will dig over 26 miles of tunnels in London.

The joint venture (JV) of Skanska, Costain, and Strabag is working on this particular section of the line.

James Richardson, the JV’s managing director, said the mission to bore this part of the route was “one of the most complex parts of HS2”.

Meanwhile, HS2 boss Mark Thurston said the launch of the TBM on the longest section of tunnels through the capital was a “significant moment” for the projects and demonstrated momentum behind Britain’s biggest levelling-up project.

Sushila was named after a local school teacher, Sushila Hirani, and will be followed by another TBM, Caroline on the same route, next year. Caroline is named after the 18th-century astronomer Caroline Herschel.

HS2 is due to launch two TBMs from Victoria Road to Greenpark Way in 2023, while a further two machines will bore a 4.5-mile tunnel from Old Oak Common and Euston.

HS2 minister Kevin Foster said it was a “landmark” moment for the scheme, adding the project would help to “unlock better connections, quicker journeys and create thousands of skilled jobs across the North and Midlands”.

“HS2 is set to revolutionise journeys for communities throughout the country, boost local economies, and at its peak, support more than 34,000 jobs across the UK,” he added.

In total, 10 TBMs are working on phase one of HS2, the first of which, Florence, was launched last May. Florence and Cecilia, which was launched last July, are tunneling a 10-mile stretch below the Chiltern Hills.