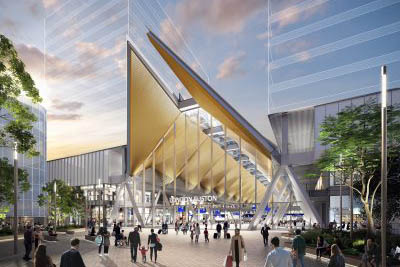 HS2 has shifted its focus from developing a “world-class” rail station at Euston to one that is “highly functional and affordable”, Construction News can reveal.

The rail group was lambasted for years over its indecision on Euston, which has led to Old Oak Common becoming the temporary London terminus while work at the Camden station catches up.

Old Oak Common, along with the rest of the stations in phase one, is set to be completed by 2028. Euston has an opening date range of 2031-36.

But former HS2 senior non-executive director Ed Smith suggested in April 2021 that the focus should now be for the group to develop a “highly functional and affordable” station at Euston, as opposed to the “world-class” option previously touted by the rail group.

In minutes covering the April meeting of the Euston Partnership Board, Smith said the “highly functional and affordable option […] [should be] of greater focus”.

“This was supported by members,” the minutes continue.

Smith stood down from his position in October 2021, when his term came to an end.

Euston has been beset with problems as the Department for Transport (DfT) dithered over its approach to the station.

In a report released last year, the Public Accounts Committee (PAC) warned that HS2 was “running out of time” to deliver the station, after it spent 15 months looking at cost saving and efficiency options.

Following months of deliberation, HS2 changed the design for Euston to a station with 10 platforms rather than 11 to save costs.

Problems at Euston, along with wider delays to enabling works, have contributed to costs rising by £800m, which will be covered by the £4.3bn contingency for the line.

Last month, DfT parliamentary under secretary of state Baroness Vere blamed the downsizing of the station for the decision to remove spoil from the area by road. MPs and residents were furious when HS2 diverted from the promise it had made to remove the debris by rail.

Railway engineer and writer Gareth Dennis said the DfT’s decision to change the plan at Euston would lead to a lot of unforeseen consequences, including the revelations over debris removal from the site.

A spokesperson for HS2 said: “Our ambition remains to build a world-class railway that delivers zero-carbon public transport, improves capacity, and better connects the Midlands and the North.

“Our focus is on making this ambition affordable and we are committed to delivering the best value for taxpayers.”