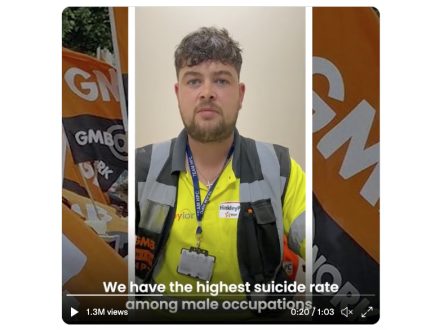 A worker from Hinkley Point C (HPC) has responded to a Daily Mail story that branded construction workers who shared their feelings with colleagues as “woke” builders.

Construction worker Jamie Busby addressed the newspaper in a video, which was shot by the GMB Union. He explained that talking to colleagues on site could save lives and it was not a laughing matter.

“We work long hours on a manual job for long stretches away from our family and friends. We have the highest suicide rate among male occupations. It’s not easy being away from your home and family, but I guess you wouldn’t understand that,” said Busby in the video.

“So, if you think it’s a laugh to take the mick out of us about yoga and meditation, and other things, like our feelings and speaking to each other about our mental health, you can give your head a wobble and get in the real world. Forget your diverse culture wars and your woke narratives, and we’ll carry on looking after each other here and our mental health at HPC.”

The Daily Mail article was based on a survey by Toolstation, which surveyed 2,000 builders and tradespeople.

According to the newspaper, the survey found three-quarters of builders said they regularly discussed emotions with colleagues. One in 10 would start the day with stretching or meditation, and one in five said they had an interest in topics such as art and history.

The newspaper implied that workers were “woke” for finding healthy ways to manage their mental health.

“Forget the stereotype that builders are wolf-whistling, white-van men devouring greasy-spoon breakfasts and discussing sport as radios blare out inane pop music. Instead, modern tradesmen are sensitive souls, more likely to enjoy yoga, muesli, listening to Radio 4 and sharing their feelings, a survey has found,” began the story.

Samaritans, a charity offering support to those at risk of suicide, called the headline “unhelpful” and said it only further stigmatised mental health in the industry.

“Instead of mocking, let’s celebrate and share things we can do that could be potentially life-saving for people who might still feel they have to live up to outdated stereotypes,” said the charity in a tweet.

It encouraged workers to continue to check on their friends.

The Daily Mail headline also serves as a call to the media about the handling of stories, and awareness of the class gap that can often exist between journalists and occupations such as construction.

Journalist Jake Hanrahan said on Twitter: “Whoever wrote this headline has clearly never spent time on a building site. Most builders I laboured for when I was a teenager were very smart and interested in all sorts.”

Construction workers are 3.4 times more likely to take their own life than workers in other jobs, according to data from the Office for National Statistics (ONS).

One of the biggest antidotes to mental health has been opening up to others about one’s battles. Mental health first-aiders have previously told CN that getting workers to talk can be like “drawing blood from a stone” because of the stigma that persists.