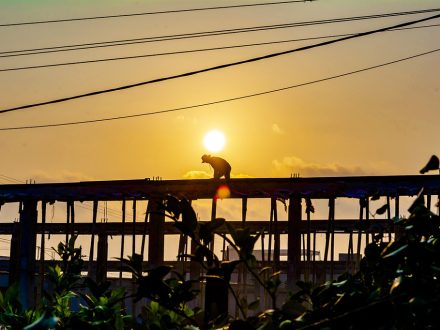 Reduced working hours, more breaks and alcohol warnings are among the measures being introduced by contractors this week as the UK braces for record temperatures.

The Met Office issued an “exceptional” weather warning for the temperatures on Monday and Tuesday, when the temperature in southern England is expected to reach up to 41°C on Tuesday. A swathe of the rest of the country, from the south up to York and Manchester, has been issued with a red ‘extreme heat’.

Several contractors have told Construction News about the action they plan to take to keep their workforces and subcontractors safe.

Skanska said some sites will be working at a lower capacity over the next couple of days.

Dylan Roberts, director of health, safety, wellbeing and quality at Skanska UK, said: “Some of our site teams have already decided to reduce operations on Monday and Tuesday, including reviewing which tasks can be reprioritised and how we can keep people out of the hottest periods of the day.

“Decisions are being made locally and in conjunction with our customers. The situation is being constantly monitored.”

Roberts said the company had been planning its response “for some time”, including through liaison with its US arm, where extreme heat is more commonplace.

ISG sent out an alert to its employees about working in the heat, with a special emphasis on tower crane operators. It acknowledged that while the long-term solution was to fit cabs with air conditioners, in the short-term crane operators needed to take extra breaks to cool off in the canteen, and their welfare should be checked regularly by colleagues and managers.

The contractor also warned employees to be aware of their alcohol consumption the night before work. Alcohol can cause a person to sweat more and lose fluids, and increase the risk of dehydration, it highlighted.

Wates has advised its site teams to carry out risk assessments about safety wear onsite. It recommended that “sites should issue Hi Vis T-shirts, so colleagues are only wearing one layer. Arms and legs should remain covered to minimise overexposure to harmful UV rays.”

A spokesperson for Willmott Dixon confirmed the contractor was prepared, thanks to the early warning.

They said: “There may be instances where certain elements, like a large concrete pour, have been postponed, but nothing large-scale. Our project teams knew this was coming and have planned for it over the past week.”