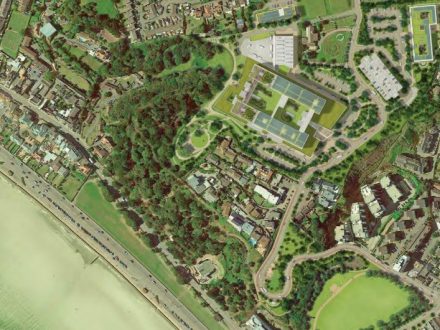 Jersey’s environment minister has approved plans to build an £800 million hospital on the island.

John Young granted consent for the scheme in St Helier, which is being designed and built by a joint venture of Spanish giant FCC and local firm ROK. It is the biggest public infrastructure scheme ever undertaken by the States of Jersey.

Young’s decision comes after alternative proposals to build on a site at Gloucester Street in the Jersey capital were rejected in 2018 and 2019.

Planning inspector Philip Staddon recommended the approval of the latest application, which will see the facility built on a 13ha plot in Overdale.

The scheme will involve the creation of an “extremely large and tall” building on the footprint of the existing Overdale Hospital, which will house operating theatres, an emergency department, and general inpatient and outpatient services.

Four smaller structures will accommodate a mental health centre, an energy centre, offices and a multi-storey car park, while surface parking will also be provided.

Staddon conceded that the project would change the skyline of St Helier and the “distant background settings of some of Jersey’s iconic heritage sites”. But he concluded that elements of policy compliance, and the “major public benefits” of health service provision, outweighed any harm and “policy tensions”.

The inspector set out 47 planning conditions for the scheme to comply with, which were subject to only minor amendments from the minister.

These include a requirement for a phasing plan to which the development will be submitted, and approved in writing by the Infrastructure, Housing and Environment department, before work can start on site.

A whole-lifecycle carbon-emissions assessment for the hospital will also have to be signed off before the main works can begin.

Reports have suggested works could begin on site early next year.