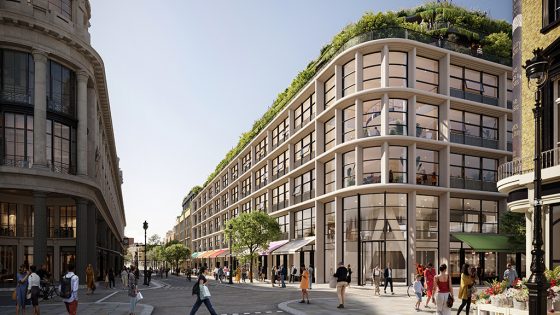 Plans for a major mixed-use development in Bayswater, London, have been given the go-ahead.

Members of Westminster City Council’s planning committee last week approved the scheme, which will see a 1950s block of shops and flats on the Queensway Parade replaced by two seven-storey buildings.

Laing O’Rourke, which is working on the £1bn redevelopment of the former Grade II-listed Whiteley’s department store directly opposite, is understood to be lined up as the main contractor for the project.

Designed by Foster + Partners, the 17,000-square metre development will include almost 11,000 square metres of office space, as well as 11 new shops and 32 homes.

It will be built on a 0.4-hectare site using advanced sustainable construction methods to reduce the amount of concrete required, including cross-laminated timber slabs supported by a steel frame.

The facades will be based around a precast stone frame with deep-set metal windows and spandrel panels, with the projection of the stone columns and beams providing a degree of solar shading to the windows.

The retail frontage onto Queensway has been designed to feature metal and glass shopfronts set into each bay of the facade, each with a projecting retractable awning.

A report to committee members concluded that permission for the development should be granted subject to the approval of the Mayor of London and the completion of a section 106 agreement.

“The package of public benefits and their relationship to the development plan’s aspirations are given significant weight, and it is considered, on balance, that these outweigh the less-than-substantial harm to the designated heritage assets,” it said.

Objections were raised to the height and bulk of the proposed buildings, as well as their impact on the Queensway conservation area in which the scheme sits. There were also concerns over the impact of the construction work to be carried out both on the development itself and in conjunction with work on the site opposite.

However, the report said that the development had the potential to create economic benefits for the area. Although existing shops, including a post office, would be lost, these would be replaced by better-quality units with step-free access. An alternative local site will be sought for the post office, it added.

The plan was also revised to ensure that 11 of the new homes planned for the site would be affordable.