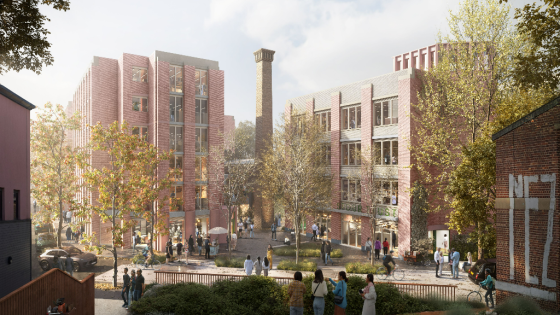 Mixed-use specialist Southern Grove Group has secured permission for the project, which will house 204 student bedrooms in two separate six-and-seven-storey blocks. The ground floors of both buildings will be used by the London School of Fashion.

The developer hopes to exceed a planning requirement that 35 per cent of student accommodation at the site is affordable and that it will provide a discount on market rents of more than 50 per cent in some cases.

Along with hundreds of rooms, there will be co-working facilities for students, in addition to space for pop-ups and creative workshops.

A third five-storey building will contain 840 square metres of commercial floorspace that will be handed over to Stour Trust, a community organisation that supports local commercial, artistic and industrial enterprises.

The scheme, known as the Piano Works, is named after the former Broadwood piano factory in Fish Island and has been designed by architects Henley Halebrown.

Commenting on the approval, Southern Grove Group CEO Tom Slingsby said the development would be a “magnet” for young people and local businesses.

“The presence of Stour Trust and the London School of Fashion will present no end of opportunities for local people and residents. This is the kind of scheme that suddenly puts an area on the map, creating a wave of inward investment that we’re sure will last for decades,” he added.