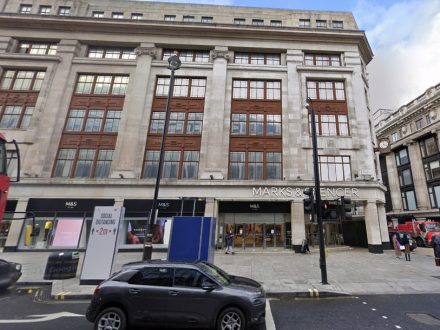 High-street giant Marks & Spencer (M&S) has accused Michael Gove of “political grandstanding” after he called a public inquiry into the redevelopment of its Oxford Street flagship store.

In April, the retailer announced plans to demolish its 100-year-old Marble Arch site and replace it with a mixed-use, 10-storey building with retail and office space.

The retailer had received approval from both Westminster City Council and the Greater London Authority for the build.

However, the project’s destiny has now been thrown up in the air, after the secretary of state for levelling up, housing and communities (DLUHC) ordered an inquiry, following concerns over the amount of embodied carbon that the existing building contains.

M&S property director Sacha Berendji has blasted the decision, labelling it “baseless” and arguing that the building cannot be modernised through refitting because of the presence of asbestos.

But a leading architecture firm has backed Gove’s decision to call an inquiry, saying demolition should only be used as an “absolute last resort”.

In a statement published on the M&S website last month, Berendji said the group had looked “very closely” at the option of refurbishing the existing Edwardian structure, but redevelopment was the “only viable way forward”.

He said part of the reason why plans for refitting were a non-starter related to the asbestos in the three buildings that make up the site. It led the group to choose to demolition.

The plans have upset campaigners, who argue the work to destroy the buildings will release 40,000 tonnes of CO2 into the atmosphere; something that Gove and the government have said should be looked at.

Responding to the government’s decision to hold an inquiry, Berendji said: “We are bewildered and disappointed at Michael Gove’s baseless decision to call in the proposed redevelopment of our Marble Arch site.

“The secretary of state has blocked the only retail-led regeneration in the whole of Oxford Street, in a building which was refused listed status due to its low design quality and, while safe, cannot be modernised through refitting as it is three separate buildings containing asbestos.”

Berendji argued that an independent assessment of the building’s carbon impact across its whole lifecycle had concluded that the new build offered “significant sustainability advantages” over a refurbishment and that the new site would be “amongst the top 10 per cent performing buildings in London”.

He added: “For a government purportedly focused on the levelling-up agenda, calling in this significant investment in one of our most iconic shopping locations will have a chilling affect for regeneration programmes across the country.

“All the while this political grandstanding goes on, we cannot get on with creating a better place to shop for our customers.”

ADAM Architecture director Darren Price said the correct decision had been made to hold an inquiry. He said it would be wrong to allow the demolition of an iconic building to “sail through the planning process”.

Price said: “We need to think universally about how we bring older buildings back to life and act accordingly. Retrofit and refurbishment should definitely be preferred options, and demolition only an absolute last resort. We are aligned totally with the AJ RetroFirst campaign.

“Planners, developers, architects and the whole construction sector should be taking far greater and joint responsibility, not only in addressing the negative carbon impacts of what we design and build, but also how we build – and in this case what we allow to be demolished, or not.”

A DLUHC spokesperson said: “This is a disappointing and misleading statement from M&S. Call-in decisions are made in line with established policy. It is right that a project of such significance should be considered by the independent planning inspectorate and ministers.”

There will now be a public inquiry into the proposals, overseen by an independent planning inspector, who will consider all of the evidence for and against the scheme. A report and recommendations will then be prepared for ministers.

A report by MPs on embodied carbon published last month warned that too many buildings are being demolished without “understanding the whole-life carbon impact”, and that the government should ask the industry to prioritise reusing and retrofitting buildings.