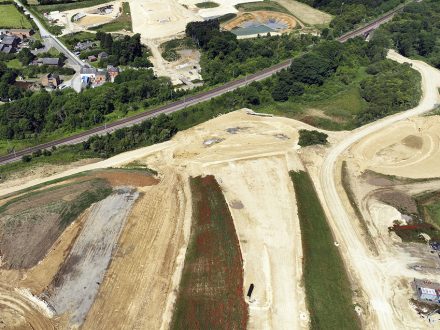 The final phase of a £133m road project in Lincolnshire has hit a construction hurdle, which is expected to delay its delivery and drive up costs.

Galliford Try’s highway business was appointed to work on the third phase of the Grantham Southern Relief Road in 2021.

The final phase, valued at £48m, will connect the A52 at Somerby Hill with a new roundabout by building a bridge or viaduct across the East Coast Main rail line and the River Witham.

Work began on site in April 2021, in line with designs drawn up by consultancy firm WSP.

But Lincolnshire City Council has now revealed that the total cost of the project could increase by £15m and be 12-18 months late due to an issue around plans to include a bridge.

In an update, the council’s executive member for highways, Richard Davies, said the on-site team had encountered soft ground on the eastern embankment, making it too unstable for a bridge.

He said responsibility for the oversight fell to WSP, which failed to identify the issue at an earlier stage.

“We’re working with the bridge’s designer, WSP, to determine the cause of this issue and why it wasn’t accounted for when it designed the foundations for the bridge,” Davies said.

He added: “The co-ordination of the ground investigation information and the subsequent design of the bridge was, and is, the responsibility of the bridge designer, WSP.”

It has been proposed to extend the length of the bridge to avoid the embankment where the ground is too soft, with Davies confirming an amended planning application was in the works.

Although the new bridge design has yet to be finalised, it is estimated that a combination of a rise in material costs and a bigger bridge will increase the total project cost by £15m, taking it up to £148m.

About £35m of the total funds will come from government pots, with the majority financed through developer contributions funded by the council.

It is expected that the project will be completed by the summer of 2025, instead of next year.

Galliford Try was also chosen as the contractor for phase two of the project, which will finish within the next few months. Only signage remained to be installed.

A spokesperson for WSP said: “Discussions in this matter are ongoing. We’re working closely with our client to find a solution that limits disruption to the local community and will support them through to its implementation.”