From Brexit to Build Back Better: what is Johnson’s construction legacy? 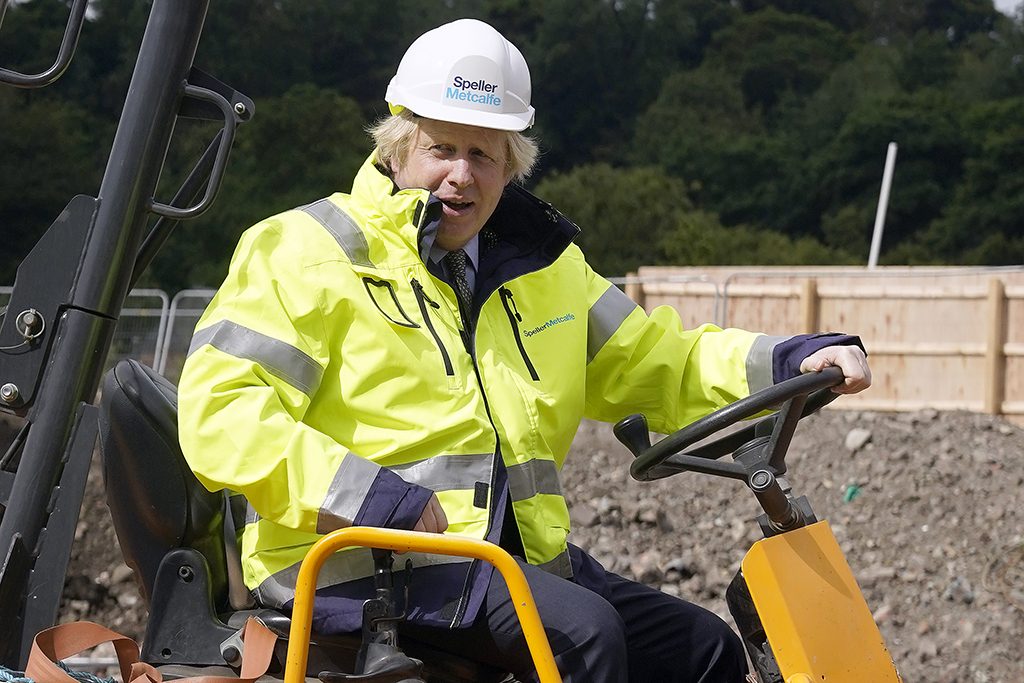 Boris Johnson’s time in office was a tumultuous and historic period unlike any other. Throughout much of it, the prime minister rarely missed an opportunity to don a hard hat and get out on a construction site, as the industry he declared would Build Back Better was rarely far from his plans. Ian Weinfass examines the legacy of his interactions with the sector.

In his first major speech in July 2019, Johnson committed his government to deliver the Northern Powerhouse Rail link between Manchester and Leeds.

The speech came soon after he told parliament that he had asked former Crossrail chair Doug Oakervee to carry out a “brief, six-week” review of the future of the HS2 project.

After what turned out to be seven months of uncertainty, during which a panel including some prominent critics of the project was assembled under Oakervee, Johnson committed the government to building all planned parts of the high-speed rail link, with Northern Powerhouse Rail to be developed at the same time.

The move drew praise from throughout the industry and saw a cover of Construction News produced in which he was made to look like Isambard Kingdom Brunel. Work duly began in earnest on HS2 later in 2020, driving civils activity during the pandemic.

However by the time the integrated rail plan – a document called for by Oakervee to outline how the projects would link up – was released in November 2021, the eastern leg of HS2 had been scrapped and Northern Powerhouse Rail significantly downgraded.

At the time, a spokesperson for the High-Speed Rail Group, members of which include Keltbray, Costain and Systra, said the U-turn “significantly dents confidence in the sector”.

Nevertheless, the biggest construction project in the UK in the first half of this century was finally begun in earnest under Johnson.

The centrepiece of Johnson’s election campaign that secured an 80-seat majority for his party was his pledge to remove the UK from the European Union, which was duly delivered under his premiership.

From the start of 2021 this has meant workers from EU countries have been subject to the same immigration rules as those from elsewhere in the world.

The move has coincided with some of the highest vacancy rates in the sector for years, with London mayor Sadiq Khan calling for a special temporary visa scheme for the construction industry to alleviate shortages.

Johnson’s administration offered no such help to boost numbers.

And despite calls from quarters such as the Confederation of British Industry and the government’s own Migration Advisory Committee, the Home Office under Priti Patel has rejected calls to add bricklayers and masons to the Shortage Occupation List. This would relax some of the rules for those high-demand roles, enabling further recruitment from abroad.

CBI director-general Tony Danker also highlighted the shortage of scaffolders, carpenters and welders. In September 2021, he said: “The government promised an immigration system that would focus on the skills we need rather than unrestrained access to overseas labour. Yet here we have obvious and short-term skilled need but a system that can’t seem to respond.”

Steering through the pandemic

Just a matter of months after he moved into Number 10, the global COVID-19 pandemic struck, causing unprecedented challenges for a modern administration – and a health scare for Johnson himself.

His conduct during lockdown would eventually be one of the things that led to his departure but – after initial uncertainty about the first lockdown rules – his government was praised for the support it gave business.

His administration introduced furlough, loan schemes, a suspension of winding up orders, and – after criticism the first time – explicitly stated construction work could and should continue when announcing subsequent lockdown measures in 2020 and 2021.

“While from a public health view there’s probably concern about the response to COVID,  I think the way that the Johnson government responded to the crisis was very strong. They looked to protect businesses,” Civil Engineering Contractors Association chief executive Alasdair Reisner told CN.

Support for the construction sector was also made the centrepiece of his plans to “Build Back Better”, to boost the economy and jump start recovery from the shocks of the pandemic.

Johnson’s government has pledged to build 40 new hospitals by 2030 – a target that has come under intense scrutiny from its inception, not least for counting extensions and already nearly built facilities (including two Carillion had started constructing) as ‘new’.

The day after his resignation speech, healthcare body NHS Providers released a survey of hospital leaders that stated two in five schemes are behind schedule, while half do not believe they have enough funding for the jobs.

While the final number could end up smaller than stated, CN last month highlighted how the programme is already pushing the take-up of modern methods of construction and collaboration in parts of the industry.

A bridge to nowhere

After plans for a Garden Bridge across the Thames and a floating estuary airport floundered and eventually failed during his time as London Mayor, Johnson showed no lack of vision for headline-grabbing projects when he proposed a bridge linking Northern Ireland with Scotland.

Mooted as a potential means of increasing “connectivity for people and particularly those that strengthen the Union”, the concept drew political ridicule from the Scottish National Party and support from Northern Ireland’s Democratic Unionists.

In late 2021 a feasibility study by Douglas Oakervee and Gordon Masterton concluded the costs of a transport link were “impossible to justify”. The study found that a suspension-bridge crossing would cost £335bn, while a tunnel would be a cheaper alternative at £209bn. Either a bridge or underseas-tunnel option would be the longest of their kind ever constructed.

Sir Peter Hendy, who oversaw Johnson’s wider Union Connectivity Review, said future technology and engineering break throughs could one day make such a scheme possible – leaving the door open to an unlikely return for the idea at a future date.

Johnson’s defiant tone during the build up to his announcement and his resignation speech suggest perhaps the public should consider the possibility of an unlikely return for the former prime minister himself one day as well.