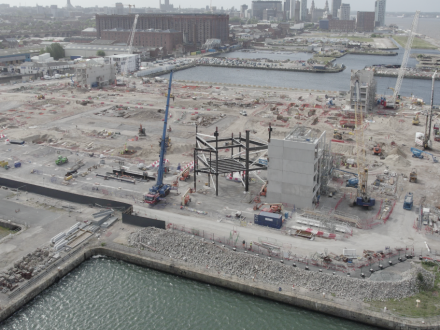 The first “super-column” of steelwork at Everton Football Club’s new Bramley-Moore Dock stadium has been installed.

Less than a year after ground was first broken on the north Liverpool development, the first 18-tonne internal column was installed last week in the north western quadrant, which will soon be annexed to the concrete elevation.

The north east corner will be erected next, with the two corners expected to be conjoined by a lattice of steelwork within six weeks, according to Laing O’Rourke.

Over 12,000 tonnes of steelwork will make up the framework of the 52,888-capacity stadium, which is set to cost £505m and be completed in 2024. The next major development on site will be the construction of four tower cranes – one for each quadrant – which will aid the installation of steelwork at heights.

Laing O’Rourke principal engineer Steve Farden called the installation of the first super-column a “huge milestone”. He said: “I’ve been working on the project for two years and a lot of detailed planning has gone into preparing for the first steelwork column to go into the north west stand.

“It signifies the start of the construction of the structural steel frame, which in turn will enable us to commence the concourse works for the north stand. Within three weeks, the steelwork will be up to level two and connected to the concrete core in the corner.

“This then means we can start readying for the fit-out phase and working towards opening parts of the stand for fit-out and commissioning.”

The first of the super columns was installed with the help of Bolton-based company Severfield steel fabricators who will oversee the work in the north and south corners.

Farden added: “Holding these super columns up are six 50mm diameter bolts, which go into a pile cap that weighs 15-20 tonnes. Below that are a total of six 15 metre concrete piles that go straight into the bedrock below, so all of that is holding the columns into the ground.”

Last month, it was announced that Laing O’Rourke had secured the final phase of development for Everton’s new stadium, with the contractor already having worked on the stadium project under a pre-contract services agreement.

Early works included the repair and preservation of a Grade II-listed dock wall, stabilisation of the hydraulic tower located on the site, preparation for the demolition of existing non-listed structures, and raking of the dock floor.

Pipework was also installed to enable the infilling of the dock.

In March, Everton suspended commercial arrangements with the main sponsor of its new stadium after its owner became the subject of sanctions by the European Union over alleged close ties to Russian president Vladimir Putin.