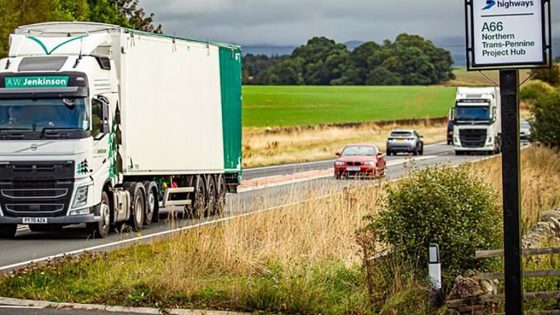 The planned upgrade of a key section of the A66 has been deemed “poor value for money” by the Department for Transport (DfT) due to spiralling costs.

The scheme to complete the dualling of the Northern Trans-Pennine route between the A1(M) at Scotch Corner and the M6 at Penrith is now expected to cost £1.3bn, marking a significant increase of £300m over the past three years.

Four big-name contractors – Balfour Beatty, Costain, Kier and Keltbray – signed an agreement earlier this month to deliver the project, which is described by National Highways (NH) as “one of the most critical road upgrades in the North of England”.

But the latest business case assessment by the DfT gave the scheme an adjusted benefit cost ratio (BCR) of 0.9, resulting in a finding that it provides poor value for money.

It added that a reduction in cost “is likely to have a positive impact” on the scheme’s BCR, lifting it above 1.0, and therefore making it good value for money.

“The latest cost increase presents affordability and value-for-money concerns, which NH and DfT will need to continue to work collaboratively to resolve,” said Bernadette Kelly, principal accounting officer at the DfT.

The increased estimate was due to a rise in the cost of land and enabling works, including changes in design to reflect stakeholder views and environmental concerns.

However, she said there continued to be a strong strategic case for dualling the A66, including levelling-up and economic growth in the North, freight and business connectivity, energy security and access to major areas of national tourism.

There were opportunities and efficiencies that could bring costs down, including value engineering, Kelly added.

The shortfall in allocated funding is expected to be met in part by drawing on headroom elsewhere in the current road-building programme, known as RIS2.

The A66, which carries high levels of freight, is a key route for east-west journeys in the North of England, and the dualling work is intended to improve safety and resilience on the road, as well as reducing journey times.