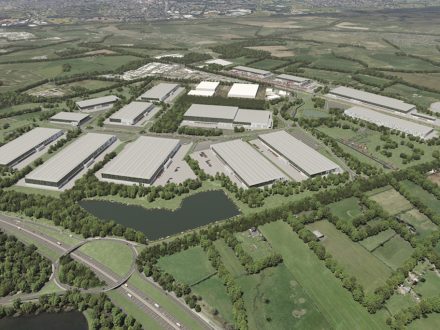 Winvic has been brought in to develop plans for a proposed £1bn railway freight interchange in the West Midlands.

The West Midlands Interchange (WMI) will be a 734 acre strategic rail freight interchange (SRFI) at M6 Junction 12. The £1bn project will offer over 8m square feet of commercial space, with state-of-the-art units ranging from 200,000 to 1.2m square feet, all supported by its own dedicated rail hub enabling multi-modal movement of goods around the UK.

Winvic has been appointed as design stage delivery partner, beating a shortlist of bidders which included Sir Robert McAlpine, VolkerFitzpatrick and Buckingham.

The site is one of a number of new SRFIs around the UK designed to enable occupiers to move increasing volumes of freight off UK roads onto the rail network. One rail freight carriage is capable of replacing 44 to 72 HGV, and generating up to 70 per cent less carbon.

The site also boasts a range of other sustainability credentials, including providing 109 acres of country park to protect and promote biodiversity, and a wide range of renewable energy features, as well as providing 8,500 new jobs for the region during its development, construction and operation.

The project is being financed and delivered by Oxford Properties, the property arm of Canadian pension fund OMERS, in partnership with European developer Logistics Capital Partners (LCP), who are already working on a 15 acre scheme at Heathrow together. They acquired the WMI site in July 2021.

Andy Busby, UK construction and project management director at LCP, said: “We are pleased to welcome Winvic to the delivery team.  They bring extensive experience of constructing large-scale complex logistics projects like this, and demonstrated a clear understanding of the leading approach we want to take to sustainable design, cutting edge automation, and lasting economic and social impact for the region.”

Winvic director of civils and infrastructure Rob Cook said: “We’re thrilled that Oxford Properties and LCP values Winvic’s sustainability credentials and experience in designing and constructing similar schemes, as well as our commitment to community and stakeholder collaboration.

“As the leading main contractor in the UK for delivering complex SRFI projects, we’re able to draw on our extensive project knowledge and assemble a skilful team to meet requirements, find innovative efficiencies and ultimately deliver the design stage output in a considered and forward-thinking way.”

The scheme was granted planning permission in May 2020, despite strong opposition.

MP for South Staffordshire Gavin Williamson branded it “idiotic”. When plans were approved, the former education secretary told local newspaper Express & Star: “This is an idiotic decision, which has left me feeling absolutely sickened. It has shown no regard or consideration for the thoughts of local people.”

Some residents have also opposed the scheme complaining that it will be built on virgin land and will see up to 9,000 extra vehicles travelling to and from the site per day, once it is operational.