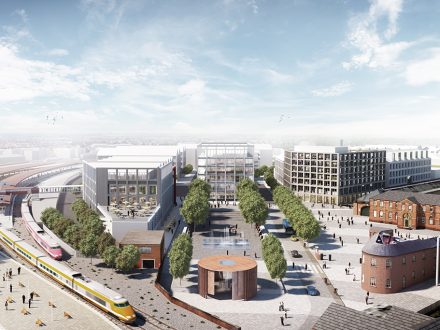 Plans for a 45-hectare mixed-use hub in York have taken a step forward, as the search for a developer gets underway.

The job to develop York Central, the biggest city centre brownfield site in the UK, will see the development of more than 1m sq ft of commercial space and 2,500 residential units.

Owned by a consortium of Network Rail and Homes England, the site sits next to York railway station and is worth a total of £1.17bn.

Property services company JLL, which was appointed to the scheme in April, is leading the search for new developers via a questionnaire launched online today. It will close on 25 August, with work expected to start in October 2023.

The vast scheme will then be built over the next 20 years and is estimated to grow the city’s economy by a fifth.

The project’s first phase is expected to deliver 700 residential units and a maximum of 650,000 sq ft of commercial space.

Network Rail group property director Robin Dobson said the scheme is one of the “most strategically important regeneration sites” in the UK.

“The development partner will understand the size of the ambition we have for York Central’s new commercial, residential and cultural community, and how important the site is as an economic catalyst for Yorkshire and the wider North of England,” he added.

“This important project demonstrates the pivotal role the railway can play in unlocking sites which deliver growth. We’re delivering it through a public and private partnership, an approach we are replicating in other towns and cities across the country.”

The project received planning permission in March 2019. John Sisk & Son has already been selected to deliver a new road, access bridge and rail link to York as part of the project.

Brownfield developments have become a core focus in the construction sector, especially after then-housing secretary Michael Gove announced £120m of funding for metro mayors to support brownfield work in February.

Last month, Cruden scooped a contract to construct the next phase of a £1.3bn brownfield regeneration job in Edinburgh. It will see the design and construction 750 new homes, out of a total 3,500 envisaged for the area.

Kier is another major contractor to seize the initiative on brownfield work. It recently formed a £80m joint venture to deliver 2,000 homes in the southeast of England, primarily on brownfield sites.