Crane topples into the harbour at Scottish demolition site 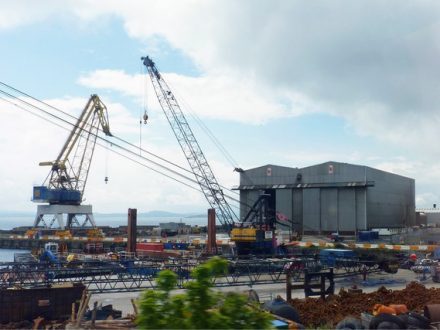 A topside element of a crane crashed into the water while demolition work was being carried out at a port in Fife, Scotland.

No one was reported injured at the harbour in Burntisland, which is located on the northern shore of the River Forth.

An investigation by the port authority is under way to find out what caused a part of the redundant crane to tip over.

The demolition contractor on site was Dem-Master Demolition Ltd, based in Bathgate, West Lothian in Scotland.

A spokesman for the port authority and the port’s owner, Forth Ports Group, said it was a “concerning” incident, but confirmed there were no injuries. They added that the demolition contractor was in “full control” of the site and was working to find the best way to recover the structure from the enclosed dock.

As a result of the incident, some gear-box oil spilled into the water, but the enclosed nature of the dock meant that it could be contained and did not spread into the Forth Estuary.

Forth Ports Group said in a statement: “We can confirm that the topside element of a redundant crane that was in the process of being demolished by a specialist contractor at the Port of Burntisland in Fife has fallen into the West Dock at the port. The West Dock of the port remains closed at this time.”

The Burntisland harbour was formerly the site of Burntisland Fabrications Ltd (BiFaB), a steel fabricator that went into administration in 2020, after the Scottish government decided not to nationalise the company. The firm used to make structures for the oil and gas sector.