Contractors praised for keeping HS2 ‘on budget and on time’ 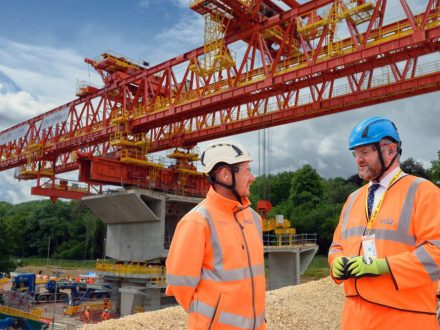 The government has praised construction workers for keeping HS2 “on time and on budget” despite significant workforce and economic pressures.

Speaking to CN during a visit to the project’s Colne Valley site, HS2 minister Andrew Stephenson said contractors had “stepped up to the challenge” to ensure work maintained good progress amid the current skills shortage and rising inflation.

Stephenson stressed it was a “top priority” of the government to see the project hit budget, adding that programmes such as HS2 were vital to attracting “new blood” into the sector.

The minister’s praise for the industry follows CN reporting earlier this month that construction firms paid out record bonuses in March to retain workers amid significant shortages.

Describing his excitement at the beginning of work on the Colne Valley Viaduct and the efforts of construction teams, Stephenson said: “We are all aware of inflation in the construction sector and challenges with recruiting appropriate numbers of skilled workers, [which] will add further pressures.

“However, I am pleased to say that all of our construction partners seem to be stepping up to the challenge, embracing innovation, and embracing different ways of working to ensure that we are still delivering this project on time and on budget.

“I’ve been really encouraged by the way our construction partners have been stepping up to the challenge.”

Stephenson added that excitement around large-scale projects such as HS2 was helping to attract people into the construction workforce and he said it was important that the sector continued to diversify its workforce.

“On site visits I’ve met people driving JCBs who used to be social workers. I met somebody who used to be an airline pilot. All sorts of people have changed career in order to work on the HS2 programme, and through things like apprenticeships we’re also ensuring that we’re bringing new blood into the sector.

“We are broadening the amount of opportunities that we’re providing to people from ethnic minority backgrounds or women to work on the programme. And I think that is all for the good of the construction sector, because we do need to get people from a diverse range of backgrounds.”

In March, Stephenson reported to government that HS2 “remains within budget and schedule” in delivering phase one of the project during a six-monthly update – confirming that the overall budget for phase one remained at £44.6bn. But he admitted that HS2 Ltd had already drawn £1.3bn of its £5.6bn delegated contingency.

Last week, MPs urged the government to provide the construction sector with stronger guidance to ensure the UK would meet its net-zero targets.

Stephenson told CN about the contractors’ role so far in reducing HS2’s carbon footprint, saying: “We are seeing contractors time and time again pushing the boundaries of what’s been done before, and using innovation to reduce the amount of embedded carbon in this structure.