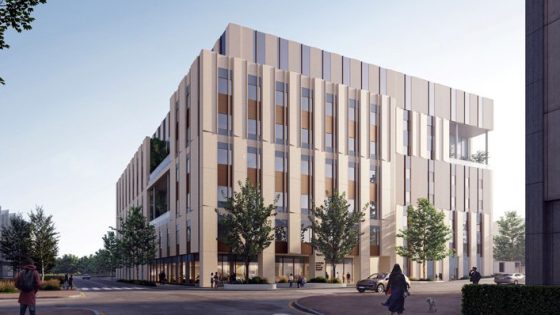 Plans for a new £300m, state-of-the-art cancer hospital in Cambridge have moved one step closer, after being given permission to find a contractor.

The Cambridge Cancer Research Hospital (CCRH) project, which is part of the government’s larger New Hospital Programme (NHP), aiming to deliver 48 hospital schemes by 2030, has received approval from the government to seek expressions of interest from contractors.

Scheduled to be built on Cambridge’s Biomedical campus, situated next to Addenbrooke’s Hospital, the seven-storey facility will measure 26,000 square metres in size and host NHS clinical space, in addition to three new research institutes. It will serve patients in the east of England.

A virtual tour of the new facility has been published by Cambridge University Hospitals NHS Foundation Trust, enabling staff and members of the public to preview the complex.

The trust has said the new hospital will have the capacity to detect cancer at an early stage and help the UK become a “testbed for oncology innovation”.

The NHS trust and NHP are working with the University of Cambridge to deliver the scheme.

She added: “The centre will help speed up diagnosis right across the east of England and transform the way patient care is delivered, pairing world-class NHS clinicians with innovative university and industry-led research. I welcome the fact that we are now actively seeking a construction partner for this major project.”

Cambridge Cancer Research Hospital research lead Richard Gilbertson said the hunt for a contractor took the team one step closer to “changing the story of cancer” across the world.

An outline business case will be submitted to the government in the autumn, with construction expected to start in late 2023.

Earlier this month, a consortium, which includes Spanish multinational Sacyr and Kier’s FM arm, was appointed to deliver a new type of contract to design, build, finance and maintain a major Cardiff hospital.