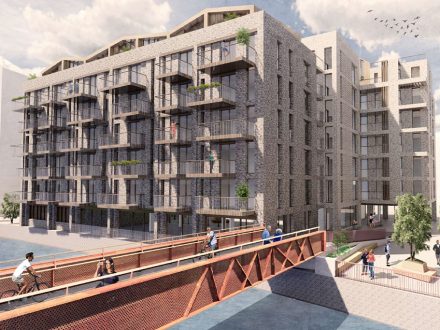 A local authority in North Yorkshire has taken Wates off a £32m regeneration project because of delays and cost issues, just a year after it was appointed.

Last May, Wates entered a contract with the City of York Council to help deliver its Castle Mills scheme, which involved the construction of 106 flats, a cycle and foot bridge over the River Foss, and a riverside park.

It was a two-part contract where the firm was asked to draw out the design for the project and provide a construction tender price for its delivery.

However, the council confirmed in a report this week that it had terminated the agreement – citing delays to the design and issues with the costing process.

It will now go out for retender, with the council confirming this will delay the build.

Its report said: “COVID-19, Brexit and rising inflation have created significant cost pressures and supply chain uncertainty, which have made subcontractor pricing of construction packages challenging.

“The design evolution process identified further challenges, which were not resolved to the council’s satisfaction.”

The council confirmed it will terminate the contract with Wates and begin the process of procuring a new delivery partner.

Some elements worked on by Wates, such as the design for the bridge, drainage, and highways, have already been accepted and will be continued by the replacement contractor.

A two-stage procurement process for the alternative contractor will now take place, according to the council, which explained that the approach would reduce costs after a single stage tender falls through.

It will also allow the client to price the risk in a more flexible and dynamic way, based on final designs.

Revenue from the sale of flats built at Castle Mill were supposed to fund the wider infrastructure in the Castle Gateway regeneration scheme.

The council said: “Whilst this is a disappointing outcome, it highlights the council’s prudent approach to procurement.

“By adopting the two-stage strategy it enabled design issues to be drawn out in the initial stage of the Castle Mills project, and rigorous assessment as to whether to proceed has enabled affirmative action to be taken.”