CITB chief Tim Balcon speaks to Luke Haynes about training workers, helping companies, and the calls for his organisation to be scrapped

The Construction Industry Training Board (CITB) presents itself as a key part of the solution to the dire skills situation facing the industry with its ageing workforce and lack of new starters. But, in recent times, the body has been beset by high-profile calls for it to be abolished.

The CITB describes its mission as “support[ing] the skills needs of the British construction sector” and has changed its core role from direct training to supporting others to deliver skills, including through grant awards.

In an exclusive interview, chief executive Tim Balcon reveals his plans to tackle the skills crisis – and responds to the critics.

Recent figures published by the CITB’s own Construction Skills Network show an additional 266,000 workers will be needed over the next four years to meet projected demand. Despite this, since 2020, the number of people employed in the industry has slumped to its lowest level since 2013 – the latest figure standing at 2.18 million. Vacancies have shot up since early 2021.

These are among the issues facing the CITB and its boss as he approaches his first anniversary in the post in September, but he is bullish about the task at hand.

“[There are] big challenges – it’s why I took the job – but they are all fixable,” he insists. “Some not easily, some not over the short term, but I’m as excited now as I was when I was offered the job.”

The CITB that Balcon runs today is much changed from the training board that his predecessor, Sarah Beale, took over in 2017.

Mark Farmer’s influential 2016 report, Modernise or Die, claimed that the CITB did “not speak for the industry” and should be “comprehensively reformed”. Further calls followed from industry bodies and companies, as well as the government in the following year.

The organisation then took part in a programme of change, moving away from the delivery of skills training through the National Construction College towards issuing training grants. It also sold off buildings, divested itself of industry functions such as the Construction Skills Certification Scheme cards and made hundreds of staff redundant. Its headcount has more than halved in seven years, from 1,500 in 2015 to 651 today.

Getting trainees into jobs

Balcon says the CITB’s main responsibility is to “support construction businesses” to ensure employers have access to the workers they need. One way in which he aims to do this is by helping to identify issues in the education system.

“In respect to further education (FE) colleges, two-thirds of people that go through construction college, or do a construction-related course, don’t end up in construction,” he notes. “The skills system is training people, but it’s not getting trained people into the industry. So, [we need to ask], what does it require to make sure FE colleges are better aligned with the needs of the construction industry?”

He says the CITB can help to answer this question by acting as the “voice of employers” and engaging with college bosses to assist them to develop courses that help firms to meet specific skill requirements. It is also working to spot future skill gaps before they occur, such as the huge demand for retrofitting and other work needed for the UK economy to transition to net-zero carbon emissions by 2050.

“For us, it’s about preparing the industry with the skills they’re going to need in the future, which is something we can do through our standards and our profiling work,” he says. “Once demand hits, [we need to] look at that capability [and] capacity of the training provider to make sure [employers] can trust the training providers are up to the right standards.”

In practice, this means the CITB will continue to fund training to help levy-registered employers to identify and access training, and it will also provide advice and guidance on mandatory and skill-specific training to approved training organisations.

Although the CITB has already undergone a huge process of change in recent times, critics still question whether it offers value for money. This view was highlighted by the results of the last round of voting on its levy proposals for 2022-25, the results of which were released a week after Balcon became chief executive last year.

Every three years, the CITB is required to hold an industry poll on whether it retains support for the collection of the levy. In 2021, it proposed to keep levy rates unchanged for the next three years. 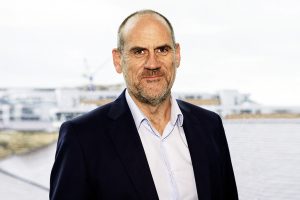 Although it secured backing to win the vote – with 66.5 per cent of independent businesses supporting the plans – this represented a significant drop in support, which stood at 76.5 per cent in 2017. The 2017 vote itself had been seen as a major turning point – a time when much of the industry had demanded reform of the organisation.

Last year, trade body Build UK, which voted in favour of the levy proposals, nevertheless called for the CITB to make “fundamental changes” to the way in which it operates, citing “widespread frustration” with the training board.

Balcon says he has spoken to “all of the trade bodies and stakeholders” during his time in the role, and their calls for “something different from the CITB” have prompted him to change the organisation’s approach and work more closely with companies.

He highlights pilots of new “employer networks” that the board launched in July as marking a shift in culture. More than 3,800 levy-registered businesses will be eligible to benefit from the year-long scheme, which aims to put small and micro-businesses at the heart of local training provision.

Balcon hopes the project, which will operate in Inverness, Lincoln, Norfolk and South Wales, will allow firms to generate specific solutions to skill issues in their area and get value out of the CITB.

“The skills needs of a builder in Mablethorpe [in Lincolnshire] are not going to be the same as a civil engineer in London,” Balcon explains.

“The skills system will be different and so will the response. But, if employers can come together in those networks, what we’ve given them is carte blanche to say, ‘What support would you require? What funding would you require to enable you to get the skills that you want?’

“Now this is a big culture shift for CITB. I’m personally really excited by these pilots because it puts the ownership with employers, and they’re starting to drive the value that they get from CITB and that shift from us telling the industry what they can have at a particular point in time.”

He adds: “It gives them a specific response to a specific problem, rather than a construction industry response to everyone. That’s one of the first tangible things that you’ll see: [we] are putting employers in the driving seat to make sure they get value from CITB.”

Be careful what you wish for

In January, the House of Lords cross-party built-environment committee called on the government to upgrade the CITB, adding that if it chose not to do so, it should consider “alternative models” for its national construction careers body.

This followed a late 2021 report from the National Federation of Builders, which called for the training board’s responsibilities to be transferred to other bodies, including a new construction careers organisation.

Balcon warns that if the CITB was to be scrapped, it would not necessarily be replaced by something focused on construction.

“We have to put that [House of Lords committee] report in context to all the other bodies that we listen to, [and] what I’ve found is that the vast majority of bodies support the CITB and the changes that we are making,” he says.

“I think there’s a word of caution here, and it is ‘be very careful what you ask for’, because I’ve worked in the skills industry since 1999, and I’ve seen various skills policies come and go – sector skills councils, national training organisations, training enterprise councils. If it moves away from a sector-specific body, it gets diluted into a skills body that looks across all the economy.”

Advocating for the industry

One way in which the body fulfils its functions is through dialogue with government, and Balcon says he will be speaking to the new appointments in Whitehall about what is needed.

“We talk to government on a very regular basis and what we want is for the skills system – so the FE colleges, universities [and] all of those qualification levels – [to ensure they] are all designed in a way that suits the individual and the industry as well,” he says.

“We talk to government on a very regular basis”

Balcon also cites the flexible apprenticeship fund as an example of its influence. It was introduced last year to support apprenticeship employment across multiple companies so that trainees can complete their qualifications even if they are on short-term contracts. It was made available for agriculture and the creative industries, as well as construction.

“The flexible apprenticeship fund is a really good example of where we’ve been able to shape a policy that fits across the entire economy, but we’ve shaped it in a way that supports the construction industry,” he says, adding that he would like to see that happen more.

Although the challenges ahead for the CITB appear great, the man in charge is optimistic that changes to training and closer working with employers will help to move things in the right direction. Time will tell whether the changes will be enough to convince the industry that the CITB is on its side before the next levy vote rolls around.

Starting out as an apprentice service engineer with British Gas in the early 1980s, Balcon’s first stint as a chief executive was with the Gas and Water National Training Organisation in 1999. During his time there, group turnover increased from £400,000 to £7m within three years.

Balcon went on to lead Energy and Utility Skills, and then spent six and a half years as chief executive of the Institute of Environmental Management and Assessment.

In 2020, he joined property-agent membership body Propertymark, but left abruptly in February 2021 after just four months in the role. He said at the time that it was in the best interest of the organisation and himself to step down “at this point in its development”.

Balcon’s next appointment was to lead the CITB.