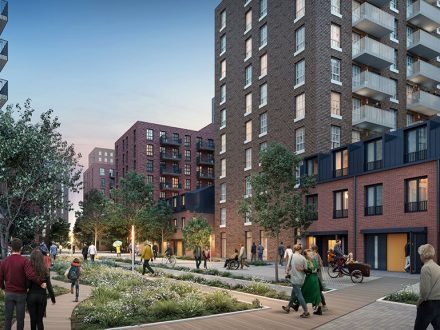 A scheme to build 1,437 homes on brownfield land in Leeds has been given the go-ahead.

The 13-acre development plan, headed by Clarion Housing’s development arm, Latimer, includes 503 affordable homes and will add 355 student homes for the city. Eleven blocks of eight to 17 storeys will be built as part of the plan, which received the green light from Leeds City Council on Thursday.

Latimer’s plan will include the development of a new park next to the River Aire, a river crossing and commercial space. The firm is set to invest more than £200m in the scheme, known as Kirkstall Road. It was designed by London-based architect Broadway Malyan.

Work will start this summer and is scheduled for completion in 2029.

The site itself has remained unused for 30 years. Latimer bought Kirkstall Road in September 2020, and had originally planned to start work in early 2021. Clarion said the delay was due to flood mitigation work and other environmental jobs taking longer than had been expected, before the planning committee hearing was pushed back by a few months.

Clarion said about 270 new jobs will be created each year until 2029, including 100 apprenticeships over the course of the build.

Clarion group director of development Richard Cook said: “Our project will kickstart development on the Kirkstall Road corridor, creating an exemplar and sustainable mixed-use community for the city.

“We want this development to set the benchmark for new housing in Leeds, including a substantial number of affordable homes for those who need them most,” he added.

Brownfield developments have become a focus of the construction industry of late, after housing secretary Michael Gove put such developments at the centre of the government’s levelling-up plans in February. He also announced that metro mayors would receive £120m to spend on brownfield projects.

Earlier this week, Watkin Jones was given the go-ahead for two brownfield residential jobs, in London and Belfast. This closely followed progress at a £155m brownfield site in York, which will deliver up to 2,500 new homes. Property services company JLL was appointed to that scheme.