Blaze to glory: How we restored the Queen’s castle 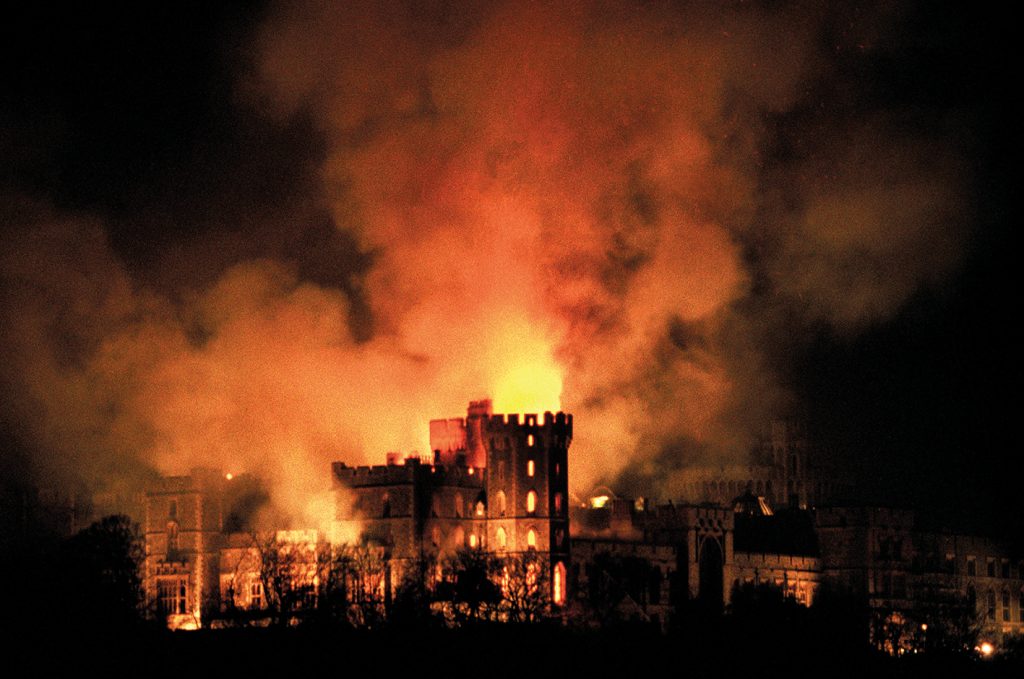 After the devastating fire at Windsor Castle 30 years ago, the restoration became a prestigious and challenging construction job. Following the death of Queen Elizabeth II, Luke Haynes speaks to those involved in the project.

A plume of thick black-grey smoke billowed across the Berkshire sky on the morning of Friday 20 November 1992, as a furious blaze broke out at Windsor Castle – the official residence of the late Queen Elizabeth II.

The fire, started by a faulty spotlight that ignited a curtain in the private chapel of the castle’s Upper Ward, was described as “unstoppable” by witnesses, and spread through the interiors of the room, melting intricate plaster wall finishes and burning its wooden pews to cinders.

The blaze spread across the Grade I-listed building, which had been built in several stages from the 11th century onwards, including major additions in the 15th and 19th centuries. It consumed several other rooms and caused the castellated section of the Brunswick Tower in the north-west corner to fracture.

Extinguished 15 hours after it started at 2.30am, the fire saw 225 firefighters douse the building with 1.5 million gallons of water.

The incident, at the end of year that the Queen famously described as her  “annus horribilis”, was devastating.

She and Philip, the Duke of Edinburgh, who had been absent from the property celebrating their 45th wedding anniversary, returned home to a scene of ruin. Around a fifth of the castle had been damaged or destroyed, including 115 rooms, while anything left standing had been drenched.

Restoring a property of such historical significance was neither cheap nor easy. The work cost a reported £36.5m in total, the equivalent of £63m today. With royal palaces too expensive to insure, a national debate ensued over who should pay for the works. Some MPs and pundits argued the Queen should pick up the bill. In response to the pressure, Buckingham Palace was opened to tourists to fund the repairs. Her Majesty also contributed £2m of her own personal wealth, and the episode resulted in her agreeing to pay income tax for the first time.

With funding secured, architectural practice and historic buildings consultancy Donald Insall Associates was appointed to act as coordinating architect for the main phases of the reconstruction and restoration. Higgs and Hill – which would later become part of Bam Construct – was chosen as the main contractor for the second phase of restoration work, which involved building new permanent roofs above two of the castle’s grand rooms and on one of its towers.

Donald Insall’s Peter Riddington led on a significant section of the work, including reimagining several state rooms. Now a consultant,  he remembers the fierce competition surrounding the job. “Everybody who could do it wanted to do it because that was their opportunity to make a career,” he remembers, smiling. “Insall was very determined to be involved because we knew that it was such an important project.”

His company was responsible for all design work on the restoration and Riddington took personal charge of the revival of the grand reception room, along with the crimson and green drawing rooms.

Recalling the labyrinth-like layout of the site, he describes his first impressions of the “total devastation” that confronted him. “Some of the rooms were okay and weren’t so badly damaged, but those such as the green drawing room, where effectively the fire brigade had cut a hole in the ceiling to pump water through it [were ruined]. The crimson dining room was just a complete shell, as was the state dining room, which was like a blast furnace. There was nothing left except for iron dogs that were fitted into the masonry […] they were the only things that gave us a clue as to where the linings of the room had been.”

He recalls the huge amount of national discussion around the approach that would be taken over the restoration – such as whether it would be more traditional or embrace modern designs. The then-president of the Royal Institute of British Architects, Richard MacCormac, had suggested that contemporary architects should be allowed to reimagine the castle building.

In the end, Riddington explains, the furniture, paintings, clocks and light fittings helped to determine the plans. These had been removed from the building before the fire, ahead of unrelated large-scale rewiring works that had been set to take place, and included some of the finest Regency-era furniture suites.

“Those suites are absolutely priceless, so the whole concept of thinking that you could recreate a room in a modern style and then put this furniture back in it was just bizarre,” he says.

Two years after the fire, workers from Higgs and Hill started on site. By this time, a huge temporary roof that had been composed had been erected in efforts to dry out the affected area and keep it sheltered, a process detailed in the book Restoration: Rebuilding of Windsor Castle by Adam Nicolson.

From the outside in

Bam UK and Ireland executive director James Wimpenny was not directly involved on the project but was working for Higgs and Hill at the time. After consulting Bam’s records of the work, he tells Construction News that the contractor’s first mission was to build a new roof. This included the section covering St George’s Hall, which had collapsed during the blaze. The structure was made of steel and covered in lead. It consisted of 30 trusses, which were composed of a pair of steel beams that were bolted together and then fixed to concrete pads in walls at each side, Nicholson’s 1997 book recounts.

Wimpenny says that constructing the roof of the hall first created a problem for the contractor – essentially forcing staff to work from the outside in. He explains that the roof was put in early to allow for a lengthy drying process, so it was actually erected while new timber, stained-glass windows and internal finishes were being procured and prepared.

“Normally, you would have put a big crane outside and lifted all the materials in. But, because it had a roof on it, all of that had to be brought in and installed inside the building,” he says.

Another challenge the lead contractor faced, according to Wimpenny, was the sourcing of materials matching those that had been used before.

“There were a lot of traditional products that maybe you wouldn’t see these days in normal run-of-the-mill construction – for example, stone that had to be mined in Bath, green oak to replace all the roof trusses, and gold leaf.”

The firm had to get inventive with sourcing materials. As an example, they looked abroad for some supplies and had to fell 70 green-oak trees. Where they met dead ends, they needed new ideas.

“We had to put steel frames [in some parts of the building], which wouldn’t have been there traditionally, but then we installed the traditional materials around it. So, it was a bit of a mixture at that point, a bit of new technology with some old.”

Reputation on the line

With an army of different specialists descending on the property, questions were asked about the cohesion of the working group.

But Riddington says issues were avoided by strong management. In particular, he credits Higgs and Hill project manager Philip Rowley, who was awarded an MBE for his leadership on the scheme. “One of the great things about Windsor was that everyone was pulling the same way. It was a contract like no other because everyone knew that this was their reputation [on the line]. They were brilliant craftspeople.”

He adds that the royals were keen observers of the work at their official residence, with Prince Philip chairing its restoration committee.

“They used to come back to Windsor – their home – from Buckingham Palace on Friday evenings and the first thing they would do is go straight onto the site,” he says. “Of course, a contractor’s worst nightmare is their client walking around a site with open holes and such things. But they would do that – they were very much involved.”

Riddington himself did not meet the Queen until after the works were completed in 1997 – during a party for all those who were involved in the project. He remembers the late monarch being “very pleased with the work” and her “incredibly blue eyes”.

Reflecting on the project three decades later, Riddington says his role in bringing back some of the country’s most historical rooms was “pretty special” but those with whom he shared the construction were the ones who had moulded his cherished memories of the job.

“One of the things that I will always take from the project is that I met some of the cleverest, skilful, most talented, creative people I have ever encountered. Just brilliant, brilliant people.

Companies that carry out work for royalty are entitled to put the prestigious Royal Arms logo on their marketing and products to show that they hold the Royal Warrant – recognition that they supply royalty with goods or services.

In the building and maintenance sector, more than 100 companies currently hold a warrant – which usually needs to be renewed every five years, but also becomes void two years after the death of the royal who issues it dies.

Commercial painting and refurbishment contractor AC Beck gained its Warrant from the Queen in April 2021 after work at several royal estates, including painting the exterior of Windsor Castle in recent years.

Managing director Stephen Beck says obtaining it took a lot of work, but insists it was “just reward” for the company’s hard work over its 70-year history.

On the warrant, he says: “It gives you standing [and means] quite a lot in terms of demonstrating quality, experience. It puts you at a different level – setting you apart from other contractors.

“We’re really proud to be involved.”

Warrants issued by the Queen are set to be reviewed in the coming years.