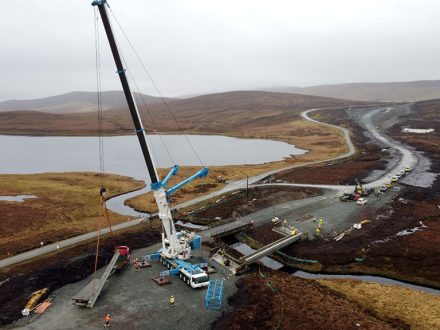 A Bam Nuttall employee has died from injuries sustained in an accident at a windfarm site in Shetland.

The incident happened yesterday morning at an SSE Renewables-operated site in the Upper Kergord area, where a converter is being built as part of the Viking windfarm project, which will set 103 turbines around Shetland.

The 23-year-old man was attended to by emergency crews after the incident, but he was pronounced dead shortly afterwards.

Bam Nuttall is the main contractor for the construction of the Shetland HVDC link and all associated infrastructure. On completion, the 450MW Viking Energy windfarm will connect to the HVDC transmission link between Shetland and the Scottish mainland.

A Bam Nuttall spokesman said: “We can confirm an incident at our Viking Windfarm project site on Shetland today has resulted in the tragic fatality of a colleague.

“Our condolences are with their family, and support is being made available to them and to members of the team.

“An investigation is under way, and we’re working closely with our client and the authorities.”

SSE Renewables head of onshore projects Derek Hastings said: “We are devastated by today’s news, and our thoughts and condolences are with the family, friends and colleagues of the young man who tragically died.

“We are working closely with Bam Nuttall and the relevant authorities to understand what happened.”

A Police Scotland spokesman said “enquiries are ongoing to establish the full circumstances, and the Health and Safety Executive will be informed in due course”.

The pouring of concrete on the first wind-turbine base took place in September 2021. In an all-day operation a fleet of ready-mix lorries delivered the required 700 cubic metres of concrete to pump into the base of turbine K84 on the Mid Kame hills.