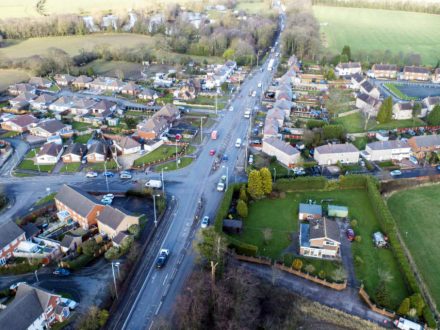 Bam Nuttall can finally begin work on the motorway link between the M54 and M6, after planning permission was granted.

The M54-to-M6 link road is valued at between £175m and £200m. National Highways claims it is needed to provide additional capacity and relieve traffic congestion on the A460, A449 and A5, leading to more reliable journey times for passengers.

The application was submitted to the Planning Inspectorate for consideration by Highways England on 31 January 2020 and accepted for examination on 28 February 2020.

Shapps was originally due to rule on the application in October 2021, but delayed his decision for “environmental considerations”.

In its recommendation report, the inspectorate advised Shapps to only grant the development-consent order once he was satisfied that the plans would not contradict the Sixth Carbon Budget, as set by the UK’s Climate Change Committee, which was announced after inspectors had concluded their examination.

In making his decision, Shapps concluded that it was “very unlikely that the impact of a road project will, in isolation, affect the ability of government to meet its carbon-reduction-plan targets”.

The decision letter added that the link road would contribute between 0.0061 per cent and 0.0082 per cent of the carbon budget.

It stated: “The secretary of state notes that the scheme will result in an increase in carbon emissions but that the view reached by the ExA [examining authority] is that it will not be so significant that it would materially impact on the ability of government to meet its carbon-reduction targets […] Overall, the secretary of state considers that: over time the net carbon emissions resulting from the operation of the scheme will decrease as measures to reduce emissions from vehicle usage are delivered; the magnitude of the increase in carbon emissions resulting from the proposed development is below 0.01 per cent of any carbon budget and therefore small; and there are policies in place to ensure these carbon budgets are met, such as the Transport Decarbonisation Plan and NH’s [National Highways’] own Net Zero Highway Plan, published in July 2021.

“The secretary of state is satisfied that the scheme is compatible with these policies and that the small increase in emissions that will result from the scheme can be managed within government’s overall strategy for meeting net-zero.”

“This examination took place during the COVID-19 pandemic and its associated restrictions, and the  examining authority worked hard to ensure that local people, the local authority and other interested parties were able to fully participate.

“The examining authority listened and gave full consideration to local views and the evidence gathered during the  examination before making their recommendation.”