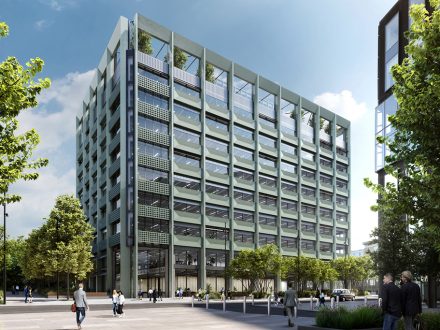 The development, which will see the construction of a nine-storey office, is the product of a joint venture by Ask Real Estate and The Richardson Family, who signed a lease agreement with the Government Property Agency today.

Ahead of the demolition of an office in Piccadilly Gate, Manchester, to provide space for the HS2 station, around 1,800 civil servants will move into the new £75m office to be built on First Street in the same city.

Around 700 staff from London offices will also enter the new Manchester headquarters, meaning that some 2,500 staff in total will be located at the site set to be completed in 2024. It is part of a wider government initiative to move civil servants out of London and into other areas of the country.

The office building is the fifth in a host of developments led by the JV in the centre of Manchester and is to be built to Excellent BREEAM standard. In total, its investment in the area amounts to £710m.

Once it has been built, the building will be net-zero carbon in operation.

The government has committed to move 22,000 civil service jobs out of London by 2030, and is estimated that the relocation of workers to Manchester will generate around £31m of benefits for the northern city.

Minister for Brexit opportunities and government efficiency Jacob Rees-Mogg said: “This new site will provide a home for civil servants from at least four different government departments, making it one of the largest hubs for cross-government collaboration and operation outside London.”

George Downing has been involved in the JV’s work in the area, scooping a job to develop a £400m housing plot known as First Street Living, made up of one 44-storey tower surrounded by a cluster of smaller buildings.