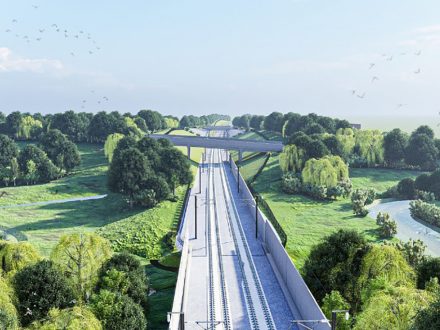 Balfour Beatty Vinci (BBV) has apologised for late payments to workers on the West Midlands leg of the £100bn High Speed 2 (HS2) scheme.

The joint venture is to give labour suppliers direct access to its Time and Attendance system to tackle the problem.

BBV is building 90km of infrastructure for the rapid rail link between Long Itchington in Warwickshire and Handsacre in Staffordshire.

But some labourers on the high-profile project have not been receiving their wages on time.

A spokesperson for client body HS2 Ltd said: “BBV is aware that administrative issues in capturing data on its Time and Attendance system have resulted in payment delays to a small number of people employed through BBV’s labour suppliers and would like to apologise for the inconvenience caused.

“Improved processes are being been put in place to ensure quicker and more accurate data capture, and to give labour suppliers direct access to the system. BBV will monitor these improvements closely over the coming weeks to ensure labour agency workers are paid appropriately in a timely manner.”

BBV’s website says it will employ “thousands of people in the area” as it creates the civil infrastructure for HS2 to run through the West Midlands.

Work to be overseen by the joint venture includes the construction of 66 bridges, 66 embankments, 56 culverts, 42 viaducts, 35 cuttings and four motorway crossings.

It emerged last month that a fifth of all senior positions at HS2 Ltd were vacant at the end of January.