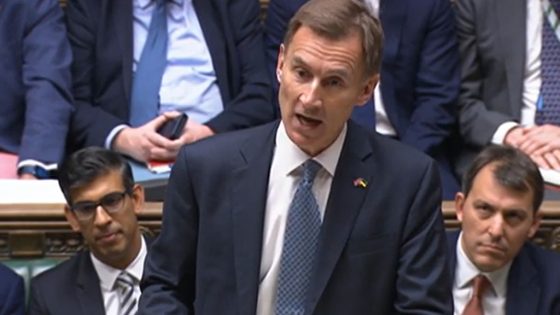 The government is to plough £6bn into energy-efficiency measures in buildings and industry, as part of a plan to slash consumption over the next eight years.

In his Autumn Statement, chancellor Jeremy Hunt said the nation must aim for energy independence and energy efficiency to reduce the country’s reliance on overseas gas.

He backed “energy independence, so neither Putin or anyone else can use energy to blackmail us; and energy efficiency, to reduce demand and climate impact as much as possible”.

Hunt said he wanted to see energy use reduced by 15 per cent by 2030. In an effort to meet that goal, the government’s annual investment in measures to promote energy efficiency would be doubled to more than £12bn from 2025 to 2028.

He also announced plans to establish an energy-efficiency taskforce to further drive progress towards achieving that aim.

“Today we set our country a new national ambition: by 2030, we want to reduce energy consumption from buildings and industry by 15 per cent,” Hunt told Parliament.

“Reducing demand by this much means in today’s prices a £28bn saving from our national energy bill – or £450 off the average household bill.”

This had to be a “shared mission” with families, businesses and government all playing a part, he said.

“In this parliament, we’re already planning to invest in energy efficiency a total of £6.6bn,” said Hunt.

“Our commitment to the British people is, over time, to remove the single biggest driver of inflation and volatility facing British businesses and consumers.”

He added that the energy-efficiency taskforce would be launched “shortly” by Business, Energy and Industrial Strategy secretary Grant Shapps, who would also be publishing further details of the government’s energy-independence plans.

Commenting on energy independence, he said nuclear power would play a key role. “I can today announce that the government will proceed with the new plant at Sizewell C. Subject to final government approvals, the contracts for the initial investment will be signed with relevant parties, including EDF, in the coming weeks.

“This will create 10,000 highly skilled jobs and provide reliable, low-carbon power to the equivalent of 6 million homes for over 50 years. Our £700m investment is the first state backing for a nuclear project in over 30 years and represents the biggest step in our journey to energy independence.”

Labour’s shadow chancellor, Rachel Reeves, later responded: “We called for the insulation of 2 million homes a year more than 12 months ago; he could have cut bills by £1,000 pounds not just for one year, but every year to come. And they did nothing. Insulation levels in 2021 were 20 times lower than in 2010 because of their neglect. And now he proposes a package but we have to wait until 2025.”

She added that the government was still blocking onshore wind-power schemes.

In a statement, Eddie Tuttle, director of policy, external affairs and research at the Chartered Institute of Building, said: “We look forward to seeing the government’s plans for the funding it has today allocated to improving energy efficiency and hearing more of the detail, which is currently lacking. Representatives from the built environment must be included in the taskforce the chancellor has announced if any plans to meet energy-efficiency targets are to be successful, and we would welcome the opportunity to share our expertise.

“The built-environment sector is, without doubt, pivotal in reducing carbon emissions, not only during the construction of new buildings and critical infrastructure, but also in the retrofitting of existing homes to make them more energy-efficient. Without this, the government will not meet its target of reducing the carbon emissions from buildings by 15 per cent by 2030 and reduce household energy bills, which continue to be one of the biggest concerns for the UK population.”