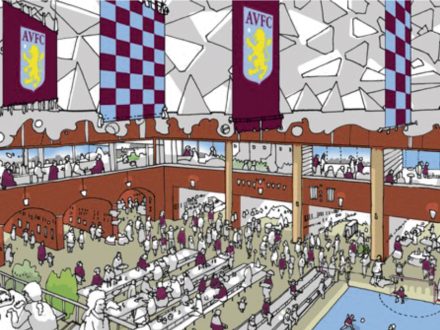 Aston Villa Football Club has launched a public consultation on plans to extend its stadium by 7,000 seats.

The consultation will run for a four-week period from 28 June, as part of the pre-planning application process for the stadium in Aston, Birmingham. It will include surveys and community drop-in sessions, which will inform the plans to be submitted in the summer.

The proposed extension will involve the construction of a new North stand and improvements to the existing Trinity stand. The alterations will boost the stadium’s capacity from 42,682 people to more than 50,000.

A centralised hub has also been proposed. The space, called Villa Live, will host the club shop, food and beverage shops, and installations about the club’s history.

The club said part of the consultation would be to invite feedback from the community about the details of the hub, including options such as a calming space for new parents, dance studios and other kinds of training facilities.

The first phase of development would include landscaping the public arena and streetlighting.

The club said it was also in the middle of talks with local authorities about improving transport infrastructure in the vicinity.

If plans are approved, construction work will be carried out over the next three years.

Other stadium plans in the UK include Liverpool Football Club, which has received planning permission for a £60m expansion of Anfield. Construction of Everton’s new stadium is also under way, with the prospective new owners pledging to fund the remainder of the project.

Meanwhile, funding is being finalised for £100m plans to revamp the Tranmere Rovers stadium in Birkenhead, Merseyside.