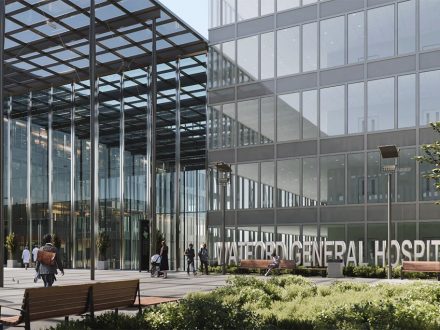 A £1.1bn Hertfordshire hospital scheme has been approved by the NHS trust, despite costs doubling since the plans were initially proposed.

The approved scheme, which forms part of a national hospital building pledge, includes the construction of a new emergency hospital in Watford, along with major refurbishments at Hemel Hempstead Hospital and St Albans City Hospital. It is included in the 48 hospitals to be delivered as part of the New Hospital Programme (NHP) by 2030.

The green light was given by the board members of the West Hertfordshire Teaching Hospitals NHS Trust (WHTH).

WHTH chairman Phil Townsend stressed the urgency for construction: “With every passing month our buildings become harder and more costly to maintain. This would be a worry for any organisation, but when you consider that we are in the business of caring for unwell and vulnerable people of all ages, and for women giving birth, the responsibility to deliver a solution quickly is huge.”

The board approval thrusts the scheme onward to the next step, when the outline business case with cost and delivery details will be drawn out.

In March, the estimated cost to develop the set of Hertfordshire hospitals more than doubled, from an original £410m to £1.1bn. Construction costs, inflation and a change in the scope of the project were factors said to have led to the increase.

The outline business case for the scheme will be sent on to the Treasury and the NHP for funding to be approved.

Last weekend, the Sunday Times reported that many business cases for hospitals in the government’s programme had been stuck with the Treasury and the Department of Health and Social Care, which gives the final sign-off.

It revealed that out of the 48 earmarked schemes, 10 smaller projects were due to start before September 2024, and eight larger ones that were meant to be completed no later than 2028 had not been given a start date. Meanwhile, only six schemes that started before the current administration have begun construction work and only one has been completed.

The national paper said the Treasury had taken over the budget because it was concerned that the Department for Health would not be able to control the spiralling costs.

This week, shadow health secretary and labour MP Wes Streeting wrote a letter to the National Audit Office, calling for an investigation into the delays.

He said: “NHS trusts are still waiting to be allocated funds to begin construction two-and-a-half years on from the general election. This is despite many of these planned building works only being alterations or refurbishments, not in fact “new hospitals”. I am concerned that unnecessary delays will result in [a] significant waste of taxpayers’ money, given the increase in prices for construction materials in the past year.”

The Treasury and the Department of Health and Social Care have been approached for comment.