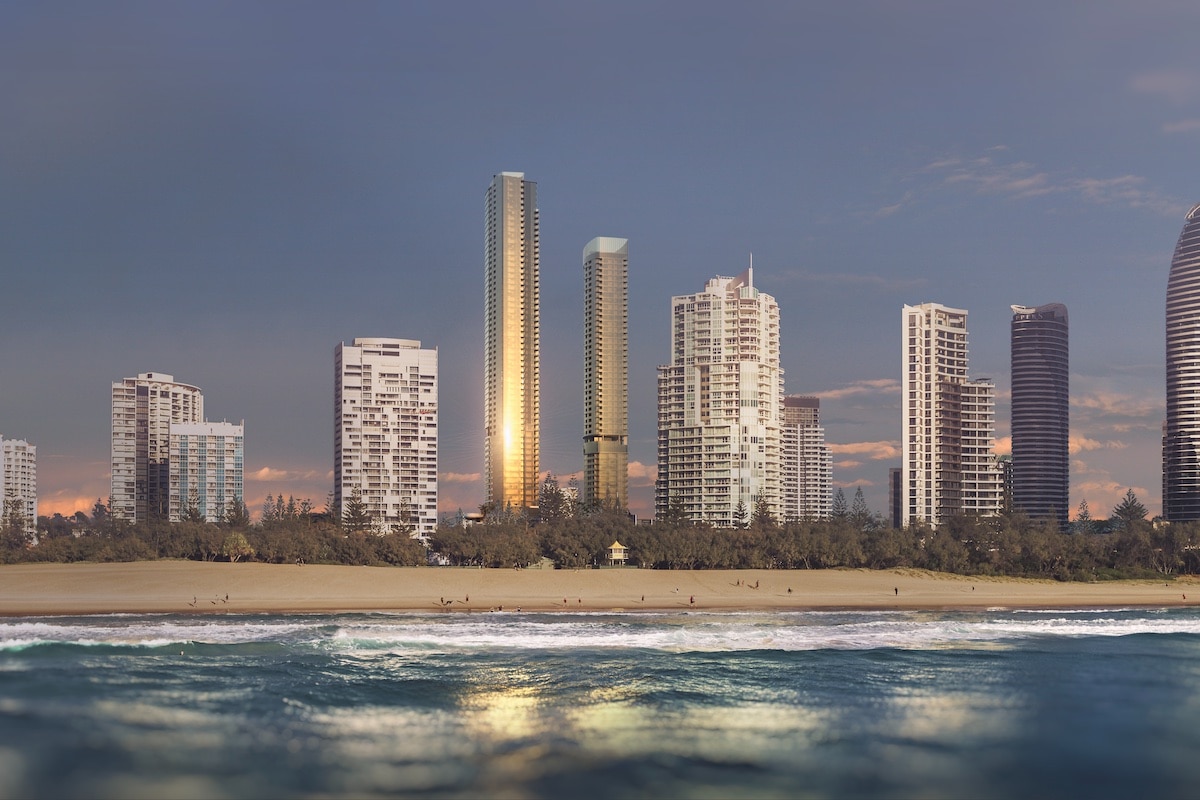 The Star Gold Coast is seeing major progress on their $2 billion-plus master plan, with the second 63 storey hotel and apartments tower reaching a significant construction milestone.

12,000 cubic metres of concrete has been poured on the 21-metre high, six level podium – the foundation for a luxury recreation deck with pool, pool bar, events lawn and other exciting, new hospitality amenities.

The $400 million development, featuring a soon-to-be-announced internationally renowned hotel brand, with 210 rooms and 457 one, two and three-bedroom residential apartments, is on track to open in 2024.

The new five-star hotel will sit above the six-level podium connecting directly to The Star Gold Coast’s other resort offerings via a continuation of the ground level boardwalk, a level three retail promenade and the recreation deck.

The lower levels will be for carparking, with 350 additional public car parks added to connect with the existing resort carpark.

All 457 apartments have been sold with almost half of the purchasers being local investors.

Chief Operating Officer of The Star Gold Coast, Jess Mellor said the changing face of the Broadbeach skyline will soon be noticeable, with the tower starting to rise to its ultimate 200-metre top out height.

“It’s a really exciting stage of construction as we’ve reached the point where every week from now on, we will see the tower taking shape rising approximately a level every week,” Ms Mellor said.

“We’ve just opened the brand new The Star Residences and Dorsett Hotel, which takes the current accommodation options at The Star Gold Coast to well over 1,100 rooms.

“By the time this game-changing development is complete we will have more accommodation offerings than any other resort in Australia, with as many hotel rooms as Marina Bay Sands in Singapore.

“Despite the ongoing challenges of the pandemic we are proudly and confidently investing in the Gold Coast.

“Our masterplan allows for a total of five towers, so we are continuing to build a world-class tourism and entertainment destination in one of the world’s most sought-after holiday locations, creating hundreds of jobs and supporting our local economy.

“We have just seen the 10-year countdown to the 2032 Olympic and Paralympic Games commence, so we are on that runway to maximising a decade of tourism and investment opportunities for the city.”

This is the second of two landmark projects The Star Entertainment Group and its consortium partners Chow Tai Fook Enterprises and Far East Consortium have invested in on the Gold Coast and highlights the consortium’s commitment to Queensland and the resurgence of the state’s tourism industry.

The joint venture partners are also developing the transformational Queen’s Wharf Brisbane project due to commence a staged opening from the second half of 2023.