Robots trialled on construction of Building 360 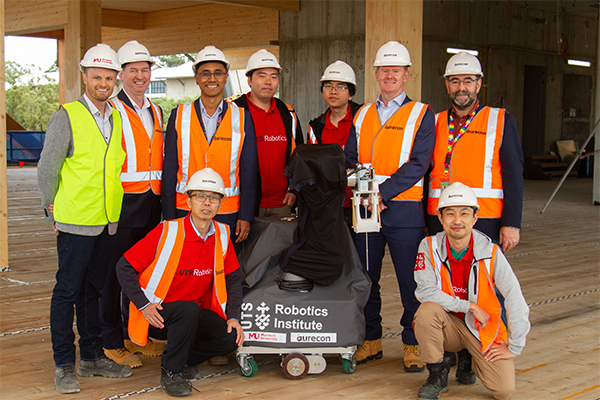 Aurecon has introduced robots into the construction of Murdoch University’s Building 360, in a world-first trial.

University of Technology Sydney (UTS) researchers designed the robots to deliver cumbersome screw fixings. This task can cause fatigue and injury in workers due to its repetitive and labour-intensive nature.

“The project’s immediate objective is focused on proof of concept, to demonstrate the robot’s capability of installing screw fixings in an accurate manner,” Spies said.

“The long-term objective is to prove that the modular nature of timber construction will benefit from the automation of some on-site construction activity, helping to increase productivity, reduce cost, improve workers’ OH&S, and advance innovation in the construction industry.”

“MET is a completely renewable resource and a more sustainable construction material than conventional steel or concrete, which is a huge contributor of greenhouse gas emissions globally. The building will also have a large array of photovoltaic cells to supply its power needs,” Deeks said.

“Working with our design, engineering and advisory partner Aurecon, we set out to determine where technology would add value to the construction process – an opportunity to modernise an industry that, by and large, is yet to take a significant leap in innovation.

“Construction sites are varied, complex and changing – and that can be a real challenge for a robot to navigate and conduct operations such as drilling a screw into the right position,” Liu said.

“What we have been able to design is an intelligent robot that can focus on an important task even amidst this disruptive environment.”

There are around 200,000 to 300,000 screw fixings on the Building 360 construction site and the robots have been trialled installing approximately 50 to 100 fixings as part of the proof of concept.