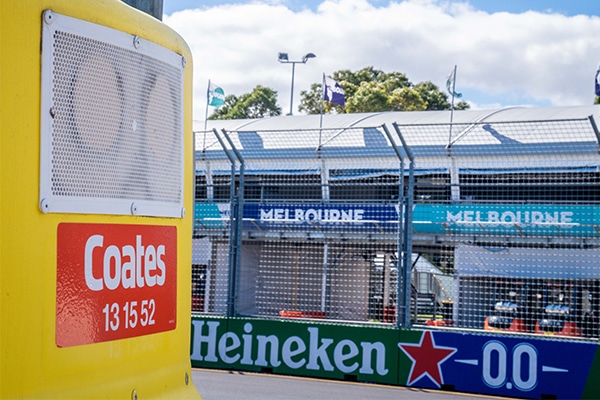 Since 1996, Coates has supplied equipment to the Australian Grand Prix Corporation (AGPC) for the Formula 1 Australian Grand Prix at Albert Park in Melbourne. After a two-year hiatus due to the pandemic, Coates was engaged to supply a fleet of generators for the 2022 event to supplement the permanent power at the site and power key areas including the pits, catering kitchens and corporate hospitality suites and pavilions.

As the Albert Park Grand Prix circuit is non-permanent and effectively rebuilt each year, staging the four-day event for more than 400,000 people required the construction of substantial temporary infrastructure. The build started at the end of January and took four months to complete.

“The key challenge for the AGPC is that we’re on a temporary site,” says Matthew Walton, Division Manager – Infrastructure at the AGPC. “The event relies heavily on temporary power, so we required efficient, high-quality generators to ensure that power was delivered seamlessly without fault.”

Working on a busy site in a public park also presented challenges, says David Bekos, Onsite Project Manager for Generators at Coates. “The site is massive and we had to navigate other park users and large numbers of contractors, along with rough terrain and the unpredictable Melbourne weather,” he says.

Coates were contracted to supply 180 diesel generators, ranging from 10 kVA to 1250 kVA, which provided up to 5 mVA of temporary power to the site. Ten days prior to the race, the scope increased to 207 generators due to increased spectator numbers, which meant more power was needed for extra facilities such as food vans and toilets.

“Our extensive branch network and large fleet meant we could rapidly respond to the AGPC’s request for an additional 27 generators, ranging from 20 kVA to 60 kVA, and we were still delivering generators the day before the race based on last-minute demand,” says David.

The Coates team were on site from day one to bump-out. “We had most crew on site in the two weeks leading up to ‘tools down’, which was seven days before the big race,” says David. “There were always constant changes to the hire requirements, so we had to be very reactive and come up with solutions on the ground.”

“Reliability of our machines was crucial,” says David. “Once the generators were on site, we had a team of 10 mechanics and electricians maintaining them throughout the event, checking each machine, making sure they were running smoothly and trying to foresee any issues.”

Coates successfully delivered temporary power for the event, which attracted a record crowd of nearly 420,000 spectators over the four days. David attributes this to new equipment, responsive service and the vast experience of the project team.

“Over the past 12 months, we’ve purchased a lot of new diesel generators, which are quieter, more fuel efficient and easy to use,” says David. “Fuel-efficiency was a key consideration, as it results in reduced operating costs and reduced emissions for customers like the AGPC.”

The success of this year’s event has strengthened the AGPC’s relationship with Coates, says Matthew.

“We rely heavily on Coates’ ability to supply a large volume of quality equipment, as well the team’s experience and capacity to deliver such a large event like the Formula 1 Grand Prix,” Matthew says. “For me personally, working with Coates has been fantastic. I’ve worked with Coates now for over 17 years and enjoy working with the team that helps me to deliver the world’s best event.”