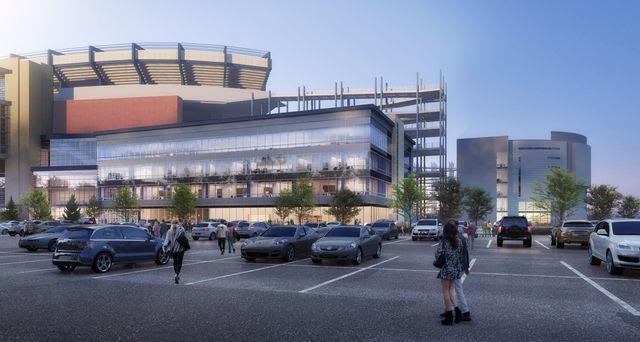 Quincy, Massachusetts-based general contractor Dellbrook | JKS broke ground in February, the SGA spokesperson said, and should be able to complete the building for its scheduled October opening.

The compressed timeline required intense planning and foresight during the preconstruction phase, according to an SGA press release shared with Construction Dive.

That meant project teams purchased building materials, such as steel and MEP equipment, well in advance to avoid problems with supply chain snarls.

SGA said it designed the new office to work with the stadium’s original architecture and interior building flow, and that it is flexible enough to accommodate additional floors in the future.

Suffolk Construction is leading the renovations on the stadium itself, with 75,000 square feet of hospitality space, an enhanced lighthouse and the largest outdoor HD video board in the United States, according to the Kraft Group. That project, which includes south end zone improvements, is scheduled for completion prior to the 2023 NFL season.

A look at the new building control regime for higher-risk…