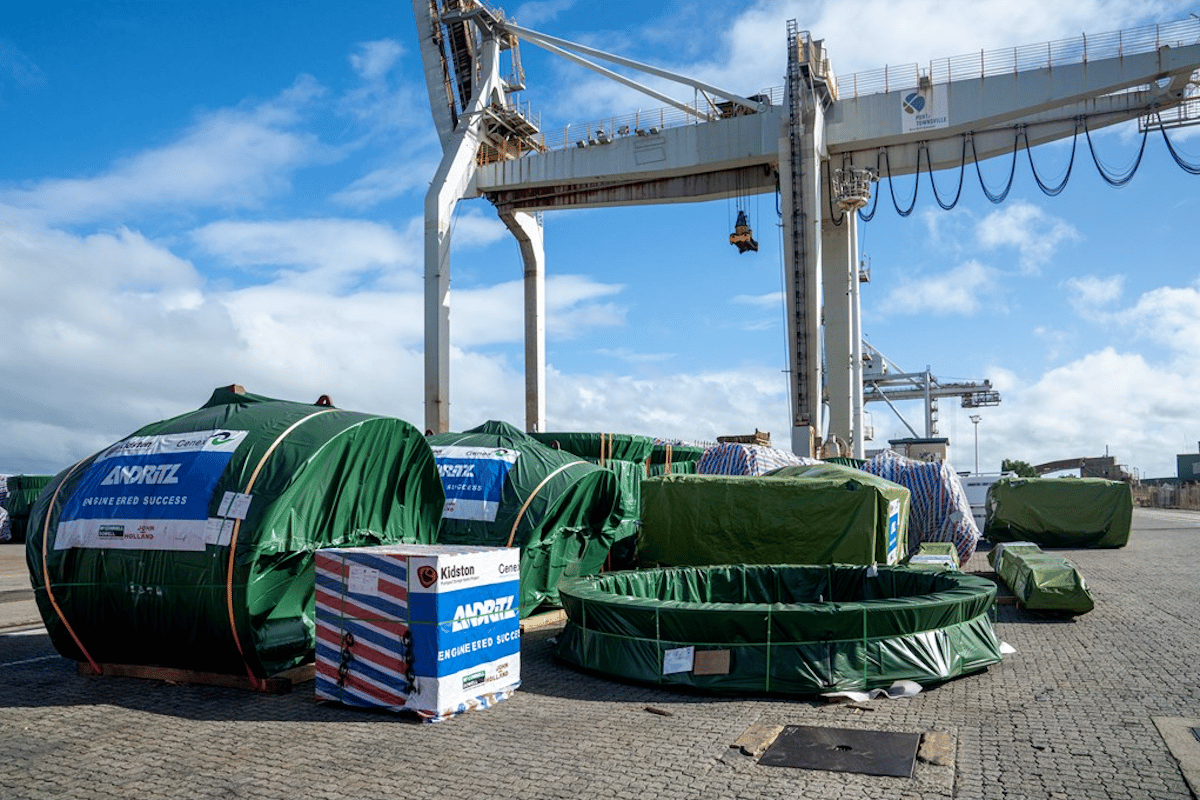 The North Queensland Kidston Pumped Hydro Project involves the conversion of the disused Kidston Gold Mine into a pumped storage hydroelectric power plant. The first delivery of parts for the pumped hydro station have arrived at the Port of Townsville.

The North Queensland Kidston Pumped Hydro Project has reached two major milestones ahead of its expected completion by early 2025.

McConnell Dowell in joint venture with John Holland are delivering the project, with 900 jobs forecast to be created throughout the construction lifecycle.

The Genex Kidston Connection Project has received EPBC (Environment Protection and Biodiversity Conservation Act 1999) approval and the first delivery of parts for the pumped hydro station have arrived at the Port of Townsville.

Genex Power CEO James Harding said having the parts arrive in Townsville was an important milestone for the project.

“These parts will now be transported to site where they will be stored until the underground powerhouse excavation is complete and the equipment installation commences,” he said.

“The Kidston Pumped Storage Hydro Project is the Genex’s flagship project, and the first of its kind to be developed in Australia in more than 40 years.

“We’re looking forward to continuing to work with Townsville and all of North Queensland to support job opportunities as the project progresses.”

Energy Minister Mick de Brenni said Queensland will need a portfolio of energy projects to be developed by both the public and private sector to meet the state’s renewable energy targets.

“Our Queensland Energy and Jobs Plan is all about a future of cheaper, cleaner and secure energy for Queenslanders, powering good jobs in new regional industries,” Minister de Brenni said.

“It will build the Queensland SuperGrid, Australia’s largest, transporting renewable energy from the regions, powering industry and households.

“It’s pumped hydro projects that will underpin our reliable power, storing cheap renewable energy and pumping out power when we need it,” he said.

Resources Minister and Member for Townsville Scott Stewart said it was exciting to see the first delivery for Genex Power’s Kidston project arrive in North Queensland.

“This is an exciting project for the region because pumped hydro is an important part of our Energy and Jobs plan moving forward,” he said.

“This project is already creating good jobs in Townsville and North Queensland.

“Not only will the Kidston project be a fantastic mix of solar and pumped hydro it also demonstrates innovative thinking by transforming an old mine site into an energy hub.”

ANDRITZ is supplying the electro-mechanical equipment for the pumped storage hydro elements of the project.

In total, the current transport comprises 35 trucks, which are on its way to the Kidston site.

Stefan Cambridge from ANDRITZ Hydro said the manufacturing of turbine components and generator components is underway, and the arrival of this equipment is planned during the second quarter of 2023.