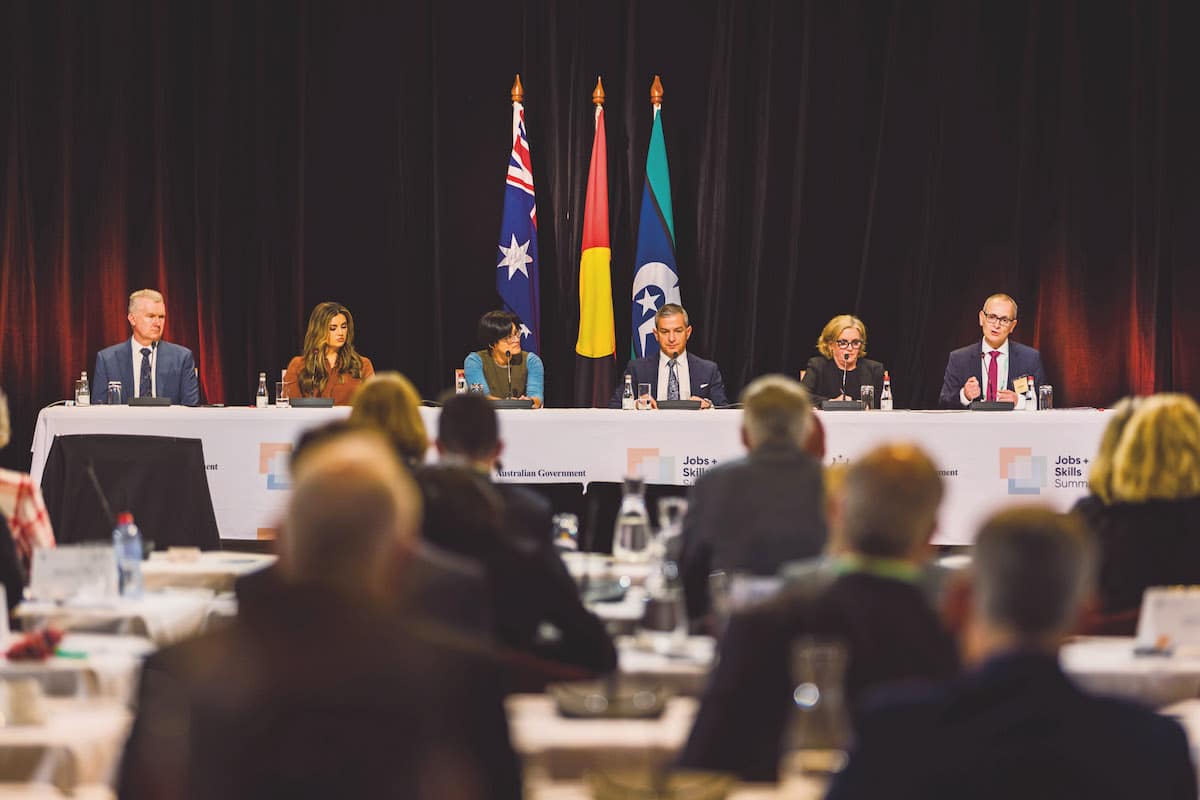 The 2022 Jobs and Skills Summit put a spotlight on the need for change in construction to secure a brighter future for the industry. Australian Constructors Association CEO, Jon Davies proudly represented the sector at this year’s Summit, sharing a simple but important message.

Walking into the marble foyer of Parliament House on 1 September 2022 was memorable to say the least. With great excitement and some nerves, I was there to represent the construction industry at the highly anticipated 2022 Jobs and Skills Summit. For our industry, this was the opportunity to put construction on the nation’s radar and to emphasise the need for change. My message was simple – ‘change will only happen if government, industry and unions leave behind the baggage of history’.

Speaking to the opportunity

Speaking under the banner of creating safer, fairer and more productive workplaces, I had the privilege of outlining the importance of our industry to the Australian economy but, as I said in my speech, ours is an industry that could and should be so much better.

As Australia’s third largest industry, employing 1 in 10 of the working population, construction offers some of the most exciting and rewarding careers. But this very industry runs on wafer thin margins and accounts for 25 per cent of all insolvencies in Australia. It operates in deeply embedded ways and has been notoriously slow in adopting digital technologies – according to global consulting firm McKinsey just hunting and fishing have a worse track record.

While in the last decade great progress has been made to improve the physical safety of the industry’s workers, the same focus needs to be applied to addressing other issues that have, by comparison, been neglected. Of critical importance is the need to improve the culture of the industry. Women make up only 12 per cent of our workforce and that percentage dwindles to single digits for trades. Disputes are common, stress is an issue and workers are six times more likely to die from suicide than a workplace incident. The problems are not new. They have been around for decades, and they are slowly killing our industry.

Better partners to each other

It was clear at the Summit that everyone wants to see change – government, industry and unions – and for the first time I could see a genuine commitment from all to be better partners to each other. Reflecting this commitment, a positive step forward was the announcement of a tripartite National Construction Industry Forum. The forum will comprise representatives from government, unions and business, including the Australian Constructors Association.

This is an exciting opportunity for the industry, and we need to grasp it with both hands. This is our opportunity to work together to transform, as other sectors have, so we can emerge as a worldwide leader and industry of choice for future generations of workers. With a focus on improving the sustainability of the industry, the group’s priorities are likely to include addressing the cultural issues that are preventing women from joining the workforce, addressing the industry’s poor mental health, developing industry capability and capacity and improving productivity.

A happy workforce is a productive workforce and improvements in culture will go a long way in easing the capacity constraints facing today’s constrained labour market. The construction industry needs a further 105,000 workers right now, which is over half of the annual government’s target skilled migration intake.

Australia is also facing worldwide competition for workers – particularly in the construction sector. The strategy of investing big in infrastructure in response to Covid is a worldwide trend and, unlike previous booms, getting people on planes has become a lot harder. The lure of our golden beaches and warm sunny weather is not enough to counter migrant concerns over high cost of living, bushfires, floods and Covid lockdowns, not to mention the opportunity to work on once in a lifetime projects like the Saudi Arabian Giga Project Neom. It is fair to say the shine has come off Australia.

Onto the topic of training, who are we going to train? We are technically at full employment. Yes, increased investment in training is necessary; however, in today’s high employment environment it will just upskill from lower skilled industries to higher skilled ones. Whilst this is still a laudable aim, it will not address the skills shortages we are facing. The answer must be finding ways to improve productivity – doing more with less.

If we could just halve the gap in productivity growth between construction and other major industries, we could be saving $15 billion annually and, importantly, significantly reduce the number of resources needed to deliver the record pipeline of work.

Government holds the key to unlock productivity gains. The Federal Government can leverage the money it grants to the states, to drive improved outcomes. Our idea for the Summit was a new ratings initiative we call the Future Australian Infrastructure Rating – FAIR. FAIR provides a mechanism for the Federal Government to ensure reforms are implemented. Essentially, FAIR would rate government funded projects on how well they performed against key reform areas such as improved productivity and increased female participation. Federally funded projects undertaken by state government delivery agencies would be given a rating that would be published, leading them to strive for better outcomes for their stakeholders.

The FAIR initiative could be included in the next iteration of the National Partnership Agreement as a requirement for all federally funded projects. If implemented, FAIR will help governments address the industry’s skills shortage and unlock productivity gains, and in the process strengthen the industry.

The Summit was a positive step forward. It secured a commitment to work collaboratively together and led to the formation of the new National Construction Industry Forum. But to move from incremental improvements to the transformation that is required our industry needs a disciplined client, a responsible client, a model client who will help us to move in the right direction. That client is government and that is exactly why the Australian Constructors Association has proposed FAIR. It is time to commit to a FAIR way forward for construction.