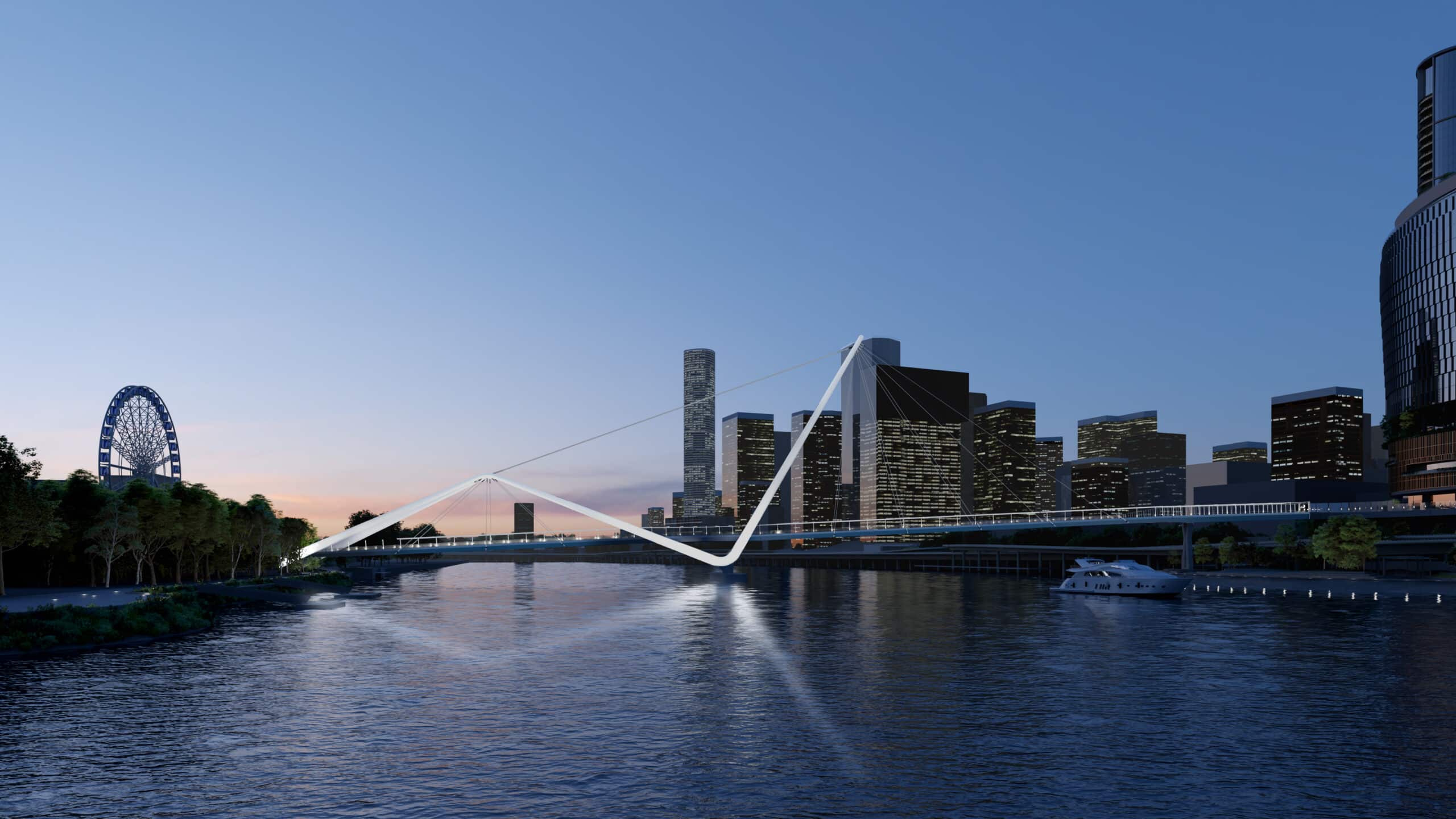 Artist’s impression the Neville Bonner Bridge at night with the mast sitting at 75-metres.

In back-to-back construction milestones for the Queen’s Wharf Brisbane development, the mast of the Neville Bonner Bridge is now in place following the installation of the first section of the Sky Deck.

Rising 75-metres at its highest point, the same height as the Story Bridge, Brisbane’s newest pedestrian bridge will connect the South Bank cultural forecourt to the CBD at Queen’s Wharf Brisbane.

“Just a day after the platform of the Sky deck was lifted into place, the installation of the Neville Bonner Bridge mast is an even more significant construction milestone,” Mr Crooks said.

“The bridge in essence creates a pedestrian only highway between Brisbane’s cultural precinct, the rail and bus network hubs at South Brisbane, and Queen’s Wharf including the southern end of the CBD.”

“Together with the 28-metres of lower mast already in place, the structure now sits at around 75-metres above the river’s edge, around the same height as the Story Bridge.”

“The final section of the mast, weighing 140-tonnes and 50-metres in length, was carefully and methodically lifted into place using a 600-tonne crawler crane positioned on a barge,” Mr Robertson said.

“The tip of the mast has an aviation safety light and incorporates an electronic beacon that is detectable by aviation aircraft.

“The construction of the 320-metre bridge will continue into 2023 with the final decks, balustrades and suspension cables installed before connecting it to the established deck section over the Riverside Expressway. The bridge connects South Bank and the integrated resort’s dining and retail level enabling direct access to the CBD via George Street.”

Senator Neville Bonner’s legacy will be acknowledged at several locations on and entering the bridge.

“The bust, long with plaques at the bridge lookout, will acknowledge the importance of Neville Bonner’s legacy as Australia’s first Indigenous federal member of parliament.”

The bridge will be open to the public with integrated resort in the second half of 2023.