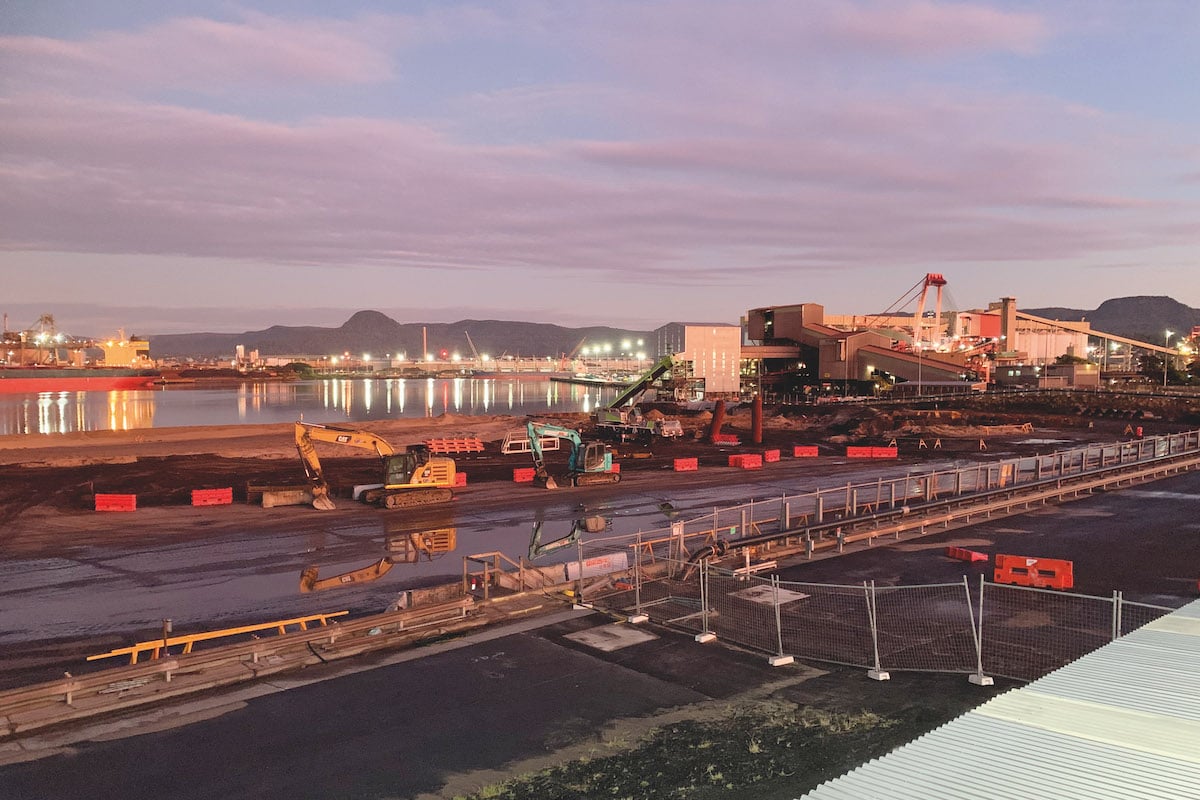 Throughout their global operations McConnell Dowell takes a holistic approach to every project, embracing practices that help minimise environmental and social impacts.

Led by Samantha Johnson, the company’s Executive General Manager of Health, Safety, Environment and Quality (HSEQ), McConnell Dowell employees are constantly looking for new and innovative ways to reduce their impact on the world around them.

Johnson says in planning a project, the company looks into the impact that project could have on the environment and surrounding communities.

“In the planning phase, we put together an extensive plan to minimise the impact a project has on the environmental and social front,” says Johnson. “The ideal result is we find we’re able to provide a positive contribution to the environment and the community.”

In 2010, Johnson successfully integrated the insurance systems of McConnell Dowell and their parent company, Aveng. This resulted in a globalised insurance program for the Aveng group and Johnson was appointed as the Aveng Group Insurance Manager, a position she still holds today.

Johnson says her responsibilities are now largely focused on sustainability. “When considering our impact on the environment we look at things like how we can reduce carbon, embrace the circular economy and minimise waste and pollution,” says Johnson.

“Our community and people are also of top importance to us here at McConnell Dowell. Our objective is to work with and for the community, keep everyone safe, embrace diversity and inclusion, and support and develop our people.”

Evidenced by the company’s large portfolio of sustainably managed projects around the globe, Johnson says the Port Kembla Gas Terminal – Marine Works project is a perfect example of McConnell Dowell’s commitment to reducing, or eliminating where possible, negative environmental and social impacts.

The NSW project involves the conversion of an abandoned coal terminal site to a gas import facility at Port Kembla to bring flexible additional energy supply to the eastern seaboard of Australia. “Driven by our engineering teams, we’ve been able to alter drilling work on the Port Kembla Project to save approximately 20,000 litres of diesel, which is around 54 tonnes of carbon emissions saved,” says Johnson.

“We’ve converted and removed several temporary works which has greatly reduced negative impacts on the marine environment, which has in turn saved us steel and another 45 tonnes of carbon emissions.

“Similar to that we’re also completing the Eastland Port Wharf 7 Upgrade in New Zealand where again, by changing the piling design, the team has managed to save tonnes of carbon emissions as well as reduce the impact on the environment and community.”

The Wharf 7 contract is part of stage one of the $60 million Twin Berth Project which will enable the safe and simultaneous loading and unloading of up to two handymax, 180-200 metre long ships.

Using digital engineering and animation capabilities to refine the staging, McConnell Dowell’s engineering team has maximised value and sustainability on the Wharf 7 Project.

Speaking on the project, Johnson says, “Through a design refining process, we have been able to remove the need for 49,000 tonnes of hardfill by using 70 per cent less steel and 50 per cent fewer piles than the original design.”

“Social impacts have been reduced with minimised disruption to port activities, and a drill and drive method to mitigate noise and vibration during piling.

“The marine environment, (Rua Koura (crayfish puerulus)) local ecology and seabed will be minimally affected due to the projects innovative design and construction strategy.”

Construction on the wharf began in April this year, with works expected to be completed in October 2023.

Johnson says more customers are now accessing loans that are purely dependent upon the plans being able to demonstrate a carbon zero or reduced environmental impact.

“We have combinations of customers who are using green finance, and their shareholders who are very interested in sustainability, and the environmental, social and governance (ESG) space,” says Johnson.

“We have drivers coming from both sides. It’s great because then, when you add into the mix the advances in engineering, and all the technology that’s available now, it’s as though everything is coming together cohesively to allow us to achieve the best possible environmental and social outcomes.”

When McConnell Dowell tend for a project, Johnson says their teams working collaboratively with the client and the community is essential to environmental and social planning.

There may be a need for additional investment in innovative technologies or sustainable materials, or research and collaboration with the surrounding communities. The client needs to be able to see the value and outcomes that arise from their investment.

“Every project is different and has a different set of factors affecting what we’re going to construct. Whether we’re working towards reducing our carbon footprint or planning a project that benefits the community during and after construction, collaboration is key,” says Johnson.

“If we can see a different way of going about construction that’s going to have a much lower carbon footprint and be kinder to the environment, then absolutely we’ll put that forward to the client.”

On the social side, Johnson and McConnell Dowell teams strive to make a positive contribution to the communities they work in through strong stakeholder engagement and consultation, providing local employment opportunities and seeking community feedback on every project.

The company also prides themselves on being proactive with social support and investment initiatives, such as supporting local Men’s Sheds, integrating Aboriginal artwork and working with local schools.

“We’re excited to be working with MRPV and McConnell Dowell to help support student leaders in becoming more environmentally aware,” Mr Yeates says. “We greatly appreciate the time and resources volunteered by the project team to beautify the school grounds.”

In Victoria, government contracts require the contractor to use a certain portion of their spend on either local or social procurement. This can involve working with minority groups in the community, purchasing from social enterprises and providing employment for people from disadvantaged communities.

Johnson says regardless of whether there is a contractual requirement for local and social procurement, McConnell Dowell look to do it for every one of their projects. “It just makes sense,” says Johnson.

“There are huge benefits out of working with the community and working with some of the more diverse areas of the community. It brings about positive experiences and outcomes for our teams and the groups that we work with.

“The local community tends to know if there are environmental hazards or areas of concern, so we’re committed to working with them from the outset of the project. That can be right from the tender period when we haven’t even won a project yet, and it continues throughout the project’s lifecycle.”

In 2021, McConnell Dowell, in joint venture with Decmil, took out the Excellence in Environmental Outcomes Award at the Infrastructure Sustainability Council Gala Awards for their Mordialloc Freeway Project (MFP).

The MFP, a 9-kilometre freeway link in Victoria, incorporates interchanges, bridges over wetlands and a shared user path. McConnell Dowell implemented a range of sustainability initiatives in response to waste crisis and shortage of quarry materials, creating what they call ‘Australia’s greenest freeway’.

“We were able to save thousands of tonnes of otherwise waste material to construct asphalt pavements, stormwater drainage pipes, noise walls and concrete reinforcing mesh, resulting in a 27 per cent reduction in embodied energy,” says Johnson.

The MFP project team were able to divert 97 per cent of construction waste from landfill, lay 321 tonnes of recycled road base and asphalt, and reuse 570 tonnes of plastic in 32,000 sq metres of noise walls.

“We’re extremely proud of our effort in using innovative new technologies and processes to complete the MFP project to a high environmental standard,” says Johnson.

Judges from the awards were equally impressed with the project. One judge said, “The focus on reduced truck trips, local sourcing and recycling is a powerful way to improve industry practices.”

“The MFP demonstrates the potential cost benefits of improvised sustainability practices while supporting development and scale-up of local industry.”

As a global company, McConnell Dowell has a goal to reach carbon zero operations by 2050, but Johnson says they’re continuously striving to improve and kick ESG goals. Many of their goals are technology dependent and efforts to achieve those goals can be seen across their operations.

To improve their carbon footprint, McConnell Dowell is introducing solar generators instead of diesel-powered generators. “Whether it’s saving water or electricity, reusing and repurposing waste, or using less materials to achieve the same result, we’re always on the lookout for sustainable and environmentally friendly solutions,” says Johnson.

“Much of the plant we use is not currently available to either be electrical or hydrogen fuelled, so we have to wait for the technology to catch up. This doesn’t stop us from doing the best we can with the resources we have.”

Visit McConnell Dowell’s website for more on their projects and services at www.mcconnelldowell.com.