Grenfell firms accused of spinning a ‘web of blame’ 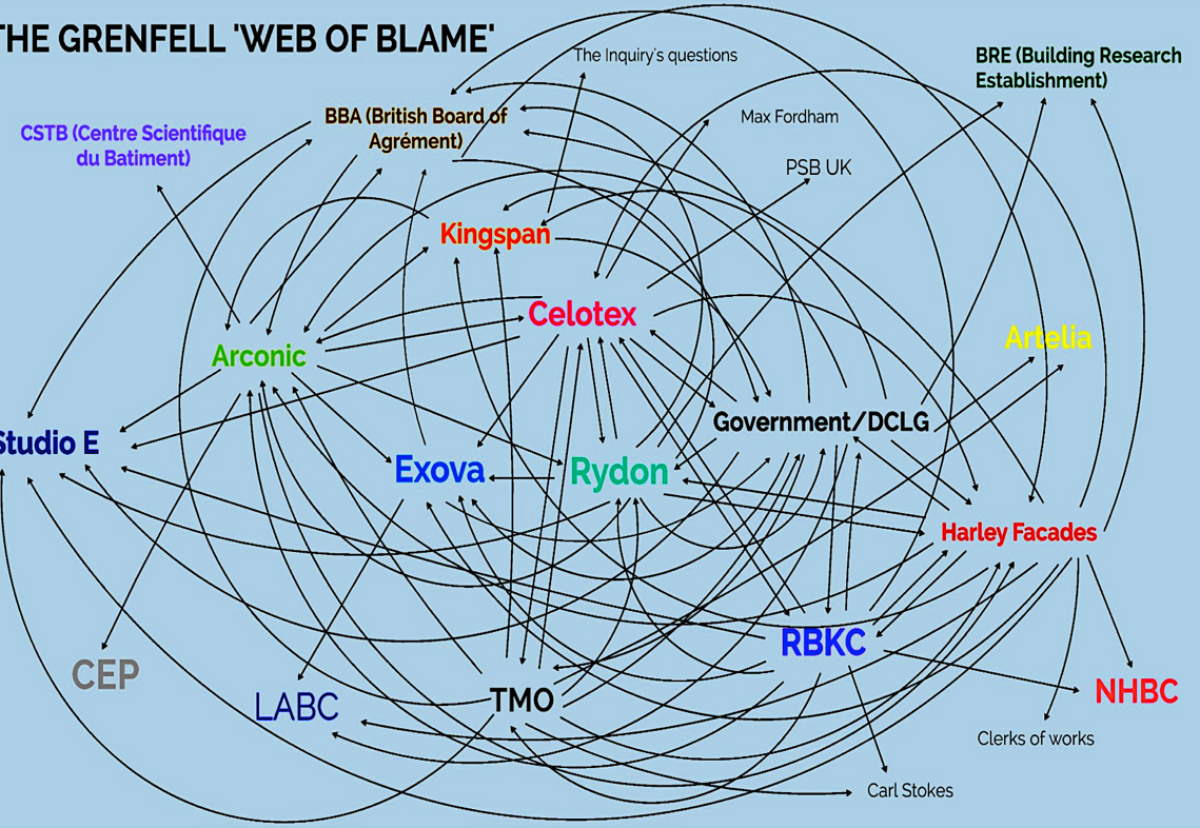 The chief lawyer for the Inquiry, Richard Millett KC attacked many of the core companies and organisations as he summed up evidence presented and said their had been a “failure to take responsibility” over the course of 400 days of the hearing.

He presented what he described as a spider’s web of blame to illustrate how each party was passing the buck to another.

The web of blame’ shown by Richard Millett KC at the public inquiry.

Millett declared: “Each and every one of the deaths that occurred in Grenfell Tower, on the 14 June 2017 was avoidable.”

His closing statements followed final submissions all week from firms involved in the refurbishment project.

He said: “If you listen closely to the tune, you can begin to hear that many core participants have adopted a particular technique; namely, the deflection of criticism by reference to causative relevance, and then, in turn, to take a narrow and technical approach to causative relevance in order to escape blame for the fire and the ensuing deaths, but then to blame others without any regard necessarily to causative impact.

“Many of the failings of many of the organisations revealed by the fire and the evidence about it are redolent of a culture pervasive through these organisations of dissociation, blame−shifting and defensiveness to cover up incompetence, lack of skill and experience, false and unverified assumptions, and plain carelessness or lack of engagement.

“There will have been many times in the evidence when I don’t doubt that you will have been  struck by how many witnesses thought that something was somebody else’s job, but never bothered to check.”

“If everything that has been said is correct, then nobody was to blame for the Grenfell Tower fire,” he said. “Can that really be right?

He added: “A tragedy of these dimensions ought to have provoked a strong sense of public responsibility .

“Instead, many − not all , many − core participants appear simply to have used the Inquiry as an opportunity to position themselves for any legal proceedings which might or might not follow in order to minimise their own exposure  to legal liability.”

Four years after opening the inquiry, chair Sir Martin Moor-Bick will now decide who was to blame. He is expected to report back next year.

The Metropoltan Police are awaiting the inquiry’s finding before deciding on potential criminal proceedings.